Equipment Accessories
Price Now $24.99
Was
Was
Save $0.00 (0%)
Questions and Answers
Availability: In Stock
This item is in stock and ready to ship. Depending on the time of day when you place your order, it will ship same day or next business day. 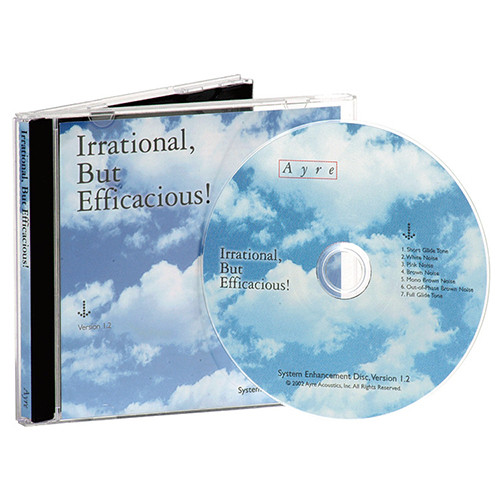 Be alerted when Cardas - Ayre Acoustics Irrational, But Efficacious (IBE) Burn-in CD is back in stock

Irrational, But Effacious! Disc: Cardas/Ayre Burn-In and System Enhancement CD Will Help Improve the Performance of Your Entire System

This Cardas/Ayre Burn-In and System Enhancement CD, titled Irrational, But Efficacious!, was awarded an Absolute Sound Golden Ear Award for its extraordinary effects on audio systems. Developed by Cardas Audio in conjunction with Ayre Electronics, the IBE disc helps with system burn-in, and also has the ability to remove built-up magnetism from your components and even your cables. Play the disc once and you will understand why we have sold thousands of these. You will hear an added sense of clarity and ease.

The main tool on this seven-track arsenal is the final track, a five-minute glide tone that when played through your system at a moderate listening volume will improve your system's sound. The theory is that this sweep will demagnetize residual fields that build up in your components over time, similar to the sweep function on the Cardas Sweep LP.

We recommend playing the last track (or even the whole disc) on a periodic basis, at least once a week for best effect. The full glide tone track is conveniently placed at the end of the disc, so that it can be easily played even if the system is unattended. Other tracks have more specialized functions.

Track 1: A 45-second version of the glide track, for a quick performance boost.

Track 3: Pink Noise, random noise with equal emphasis on each band of the audio spectrum, great for checking midrange phase and burning in drivers.

Track 4: Brown Noise, random noise with an emphasis on the midrange and lower octaves, for burning in midrange and bass drivers or checking bass integration or rattles in your room

Track 5: Mono Brown Noise, this time summed to mono. This is a very useful track when you're trying to integrate a high quality subwoofer into your audio system. Simply flip the phase on your sub and find the position where your sub makes the least bass, flip the phase back and you're set.

Track 6: Out-of-Phase Brown Noise, both channels are out of phase with each other. Similar to the two previous tracks, the Brown Noise on this track allows for quick acoustic cancellation, e.g., burning in your speakers at higher volumes without thundering your house to the ground.

Track 7: The full glide track, a 285-second sweep of all frequencies from 5Hz to 20kHz

The tracks on this disc were created digitally with 88.2kHz, 32-bit resolution. Enhanced resolution transfer to the 44.1 kHz, 16-bit CD format was performed using 0.5 bits of dither with a triangular probability distribution function for maximum fidelity.