Equipment Amplification Headphone Amp
Price Now $5,500.00
Was
Was
Save $0.00 (0%)
This product is not eligible for further discounts.
Questions and Answers
Availability: In Stock
This item is in stock and ready to ship. Depending on the time of day when you place your order, it will ship same day or next business day. 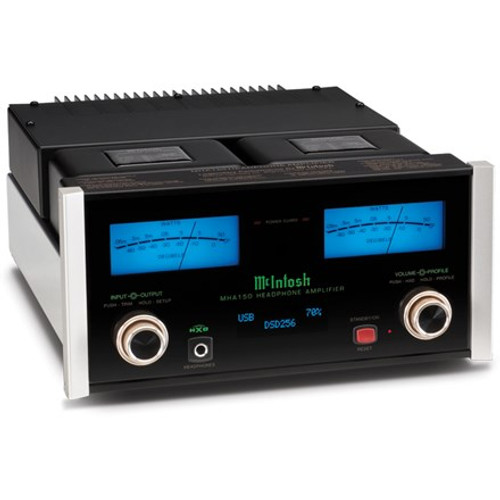 McIntosh's MHA150 headphone amplifier/DAC takes on all comers in its product category. Buttressed by a high-resolution DAC that supports up to 32-bit/384kHz PCM, DSD256, and 384kHz DXD via a USB input, MHA150 brings the signature technologies, engineering, and design of McIntosh's hallmark stereo amplifiers to a personal-listening device that has no peer. McIntosh's patented Autoformer is utilized to yield three headphone impedance ranges – 8-40, 40-150, 150-600 ohms – to ensure every type of headphone fully and completely benefits from the captivating sound produced by the U.S.A.-built MHA150. The inclusion of McIntosh's Headphone Crossfeed Director (HXD) further enhances the fidelity and makes recordings image as if they were being played back by speakers. Speaking of loudspeakers: While the compact dimensions permit the Roon-Tested MHA150 to easily fit on a desk or nightstand, this 26-pound unit is so powerful and authoritative, it even has a 50-watt output for driving loudspeakers.

Transparent, accurate, and dynamic, MHA150 doubles as a serious asynchronous 32-bit/384kHz DSD DAC and comes with an array of coaxial, optical, balanced digital, and USB digital inputs that handle everything from conventional analog sources to high-res computer audio. The addition of a proprietary MCT input offers a secure DSD connection for playback of the high-definition audio on SACDs when connected to the McIntosh MCT80 SACD/CD transport. Tone controls and a 5-Step Bass Boost Control let you fine-tune the music to your exact liking. No fewer than four forms of built-in circuit protection mean you'll rest assured that MHA150's extra-large transformer, multiple filter capacitors, and regulated power supply will last many years to come. True to McIntosh's heritage, MHA150 benefits from inimitable build quality and cosmetics that parallel its spellbinding performance. McIntosh's signature Blue Watt meters, black glass faceplate, stainless-steel chassis, brushed aluminum end caps, gold-plated binding posts, and multi-function OLED display all indicate this is no usual component. Ten minutes of listening will tell you that – and so much more. Order today with the security of our 100% Satisfaction Guarantee.