Equipment Amplification Integrated Amp
Price Now $999.00
Was $1,650.00
Was
Save $651.00 (39%)
This product is not eligible for further discounts.
Questions and Answers
Condition: Open Box
Availability: In Stock
This item is in stock and ready to ship. Depending on the time of day when you place your order, it will ship same day or next business day. 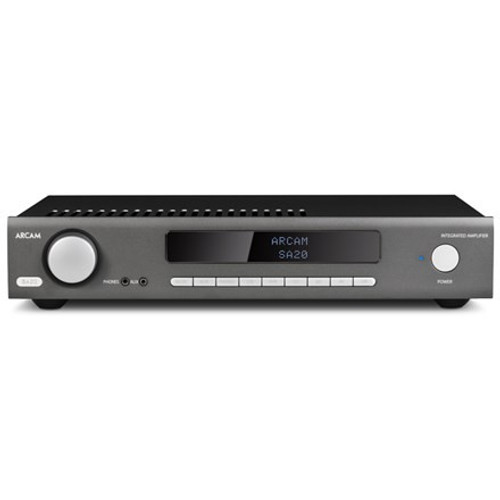 The Arcam SA20 integrated amplifier's involving sonic performance and off-the-charts efficiency owes to its utilization of Class G amplification, which permits music's low-level details to come through unimpeded while ensuring the amplifier retains the power it needs during challenging passages. Honed to perfection at Arcam from years of testing and implementation by the company's engineers, the all-analog Class G uses Class A technology exclusively for low-level signals and an additional power supply for larger sections of the audio waveform, an engineering solution that eliminating crossover distortion (caused by Class A/B) and any potential power shortages during extreme swings (suffered by Class A). The result: Nothing at all close to Class D, and truly, the best of both worlds.

Outputting a conservatively rated 80Wpc and outfitted with an audiophile-caliber SABRE ESS9038K2M DAC, SA20 also offers the aural benefits of separates in a space-conscious footprint. It arrives with an armada of inputs to handle both digital and analog sources – including turntables, by way of its built-in MM phono preamplifier. A total of five analog inputs and three digital inputs give you the options you deserve. Speaking of choices, SA20 also touts seven digital filters that minimize distortion when using the coaxial and optical SPDIF inputs.

Of course, SA20's measured specs extend to a ridiculously low total harmonic distortion/noise ratio – a number that speaks to its quiet operation. You seriously need to hear SA20 to experience how smooth, detailed, and textured music sounds during playback. Class G amplification is no joke. If all that wasn't enough, a customized remote, headphone jack, 3.5mm auxiliary input, and full I/P control further crown SA20 as English royalty deserving of a risk-free audition in your home today. 100% Music Direct Guaranteed.

"The first thing that strikes you about the sound of the SA20 is its low-end grip, which seems more powerful than is usually the case with a normal-sized amplifier; clearly the power supplies are up to the task of controlling a set of bass drivers. It also has good clarity through the midband."
—Jason Kennedy, Hi-Fi+, 2019 Integrated Amplifier/DAC of the Year Award