Equipment Amplification Integrated Amp
Price Now $1,395.00
Was $1,875.00
Was
Save $480.00 (26%)
Questions and Answers
Availability: In Stock
This item is in stock and ready to ship. Depending on the time of day when you place your order, it will ship same day or next business day. 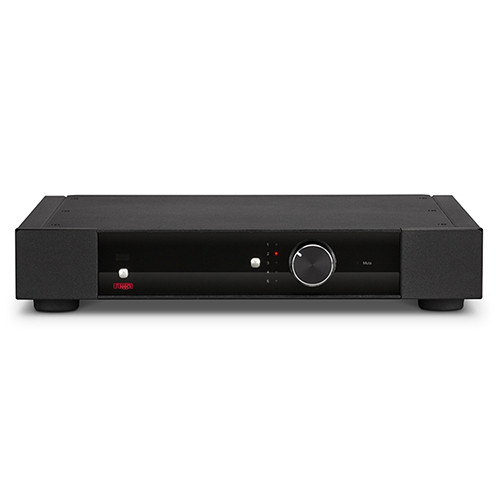 Winner of five consecutive Best Stereo Amplifier of the Year Awards from acclaimed British audio journal What Hi-Fi?, the Rega Elex-R integrated amplifier features both audiophile-quality detail and engaging musicality. A 90Wpc unit combined with an innovative volume control and Class A driver stage, Elex-R serves as a highly flexible command center capable of meeting a wide range of system demands and driving speakers with aplomb. Given Rega's reputation for producing critically acclaimed turntables, it's no surprise the built-in moving-magnet phono preamplifier is amazingly quiet and transparent, revealing the tonal textures and thrilling dynamics of vinyl obscured by lesser designs. Rega manages to such performance at a modest price by keeping the construction straightforward, eliminating anything in the signal path that could compromise sonics.

One glance at Elex-R's specs and you'll see Rega's trademark commitment to removing anything that degrades sound. By using a combined feedback and passive volume control, Rega has reduced channel-volume mismatch – a common phenomenon that distorts imaging and makes finding the ideal volume setting difficult. Elex-R's vanishingly low noise and distortion levels and effortlessly smooth dynamics are made possible by the use of dual Sanken Darlington transistors and low-impedance drivers. They conspire to enable Elex-R to reproduce the amazing micro-detail and velvety black backgrounds once only found in separates costing more than twice its asking price.

Each Elex-R is assembled by Rega's meticulous production team, renowned for producing classic audio gear built to stand the test of time. And of course, it comes to your house backed by our risk-free 100% Satisfaction Guarantee.

"There's an addictive sense of liveliness and energy, something most rivals tend to tone down in the search for greater refinement, and it demonstrates authority and scale better than anything we've heard at this price too."
– What Hi-Fi?, five-star review

Design Innovation
Elex-R is built into the full-width Rega case with increased heat dissipation which, along with a larger transformer. enables Elex-R to deliver 90Wpc into six ohms and 72.5Wpc into a design center rating of eight ohms. Included useful features like pre-amplifier output allow Elex-R to be used in a wide combination of systems. It avoids superfluous gadgets such as tone controls or a headphone socket, as they can obstruct the signal path and degrade the produced sound quality. Indeed, the primary function of an amplifier is to boost and equalize the low-level signal generated by a phono cartridge, DAC, and CD player, or other source component to a level that can drive the loudspeakers. It is vital the amplifier achieves such while minimizing distortion. The volume control and preamplifier used in Elex-R are designed to overcome the problems associated with the standard arrangement. Rega's architecture involves a custom chip along with peripheral support ICs like a micro controller and a custom-made rotary volume control. Elex-R uses a combined feedback and passive volume control, where the feedback and input levels are varied to set the required volume level. The level and tracking between the two channels is set by the close tolerance parts in the preamplifier circuit and less by the actual potentiometer itself,  keeping the mismatch of channels due to volume control tracking irregularities to a minimum. As well as keeping tracking irregularities to a minimum, this method reduces noise and input overload as the control will only use the required gain to amplify the signal.This form of volume control is normally only found in professional broadcast environments where accurate low-noise control of levels is required.