Equipment Amplification Integrated Amp
Price Now $7,999.95
Was
Was
Save $0.00 (0%)
Questions and Answers
Availability: In Stock
This item is in stock and ready to ship. Depending on the time of day when you place your order, it will ship same day or next business day. 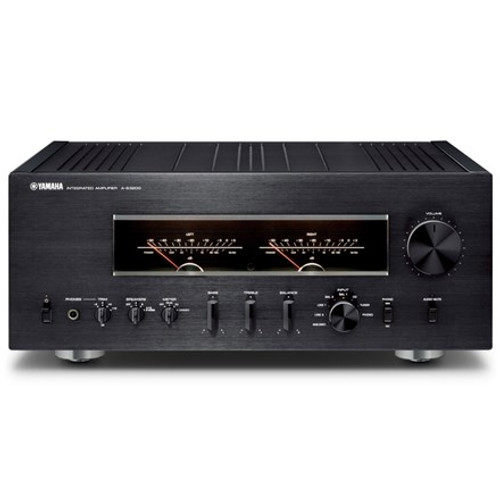 Listen to the expressiveness, purity, clarity, and openness with which the Yamaha A-S3200 integrated amplifier plays music, and you'll likely never wonder again whether one-box components can compete with separates. A reference-level design specifically engineered for discerning audiophiles and those who put a premium on sound, A-S3200 represents the apogee of Yamaha's 130-year-plus history as a master crafter of exquisite instruments and audio gear. From the rigid streamlined construction to the two pairs of XLR inputs to the touch and feel of the high-rigidity lever selectors, the conservatively rated 100Wpc A-S3200 epitomizes luxury and class. Whether starting with the gorgeously lit VU meters or culminating with the fully balanced input-to-output transmission, this 54.5-pound instrument will capture your attention in new, inexplicable ways that heighten all of your senses. The inclusion of a fully discrete MM/MC phono preamplifier and high-grade headphone amplifier add to the spoils.

While seemingly technical, Yamaha's perfectionist-minded engineering, materials, and layout pay tangible dividends in terms of soundstaging, imaging, dynamics, tonality, and liveliness. Whether you choose to spin a vinyl LP, play a CD, or streaming files, A-S3200 conveys the defining rhythms, grooves, and beats of everything from rock to blues and jazz with mesmerizing precision and speed. It does the same for the smoothness, reach, and scope of classical and chamber fare. Factor in a brushed-aluminum remote control with metallic buttons and a host of modern connectivity options – two pairs of outputs, eight sets of inputs, and a trigger in, and A-S3200 takes center stage. 100% Music Direct Guaranteed.

"Sonically, the A-S3200 stands up to anything [in its] class. However, the level of execution, combined with first-rate human engineering, and those elegant power meters, makes this a success on multiple levels."
– TONEAudio, Publisher's Choice Award

"A solid, no-nonsense choice for the analog enthusiast.... It's carefully engineered and has a hugely appealing sense of sonic precision and clarity."
—What Hi-Fi?

The fully balanced circuitry used in A-S3200 yields a number of listening benefits. Delivering impressively low signal-to-noise ratio allows for the perfection of silence – gaps in the music and moments between movements are a pure absence of sound. The design also adds to improved channel separation, producing a soundstage that makes the entire system disappear, giving you the feeling of being in the room with the artist, not the CD or vinyl source.

A large toroidal transformer is employed in A-S3200 in the pursuit of pure musicality. With less flux leakage, there is no negative impact on other sensitive audio circuits. Copper wire is directly drawn from the winded core, minimizing energy loss compared to other substitutes, allowing the full emotional energy in the music to be felt.

An expression of deep, rhythmic, and melodious bass generates feeling from the music, the story of the music. The Mechanical Ground Concept achieves this expressive and rhythmic bass by maximizing rigidity and reducing any unwanted vibration. The large power transformer, block capacitors and heat sink are directly bolted to the chassis delivering greater rigidity, while the feet, with bolts directly welded to the main chassis, provide further reinforcement for absolute rigidity. A-S3200 has original Rigid Streamlined Construction that further suppresses vibration.

Completing the rigidity of the amplifier are heavy-duty brass feet used with either spikes or a scratch-resistant base for delicate surfaces, and originally engineered exclusively for the flagship C-5000 preamplifier and M-5000 amplifier.

Use of the elegantly designed switches and knobs on the front panel present more than just input changes or volume adjustments. They serve as a connection between the owner and the engineer, a beautiful, highly tactile surface reflecting the obsessive care of the engineers.

Visually presenting the dynamics and pulse of the music, the large meters imbue a warm feeling through their softly illuminated LEDs. The glass window is cut diagonally and precision-fit to the back surface of the front panel, leaving no gaps or screws for connection. An exceptionally luxurious look and feel is achieved.