Equipment Amplification Power Amp
Price Now $20,000.00
Was
Was
Save $0.00 (0%)
Questions and Answers
Availability: In Stock
This item is in stock and ready to ship. Depending on the time of day when you place your order, it will ship same day or next business day. 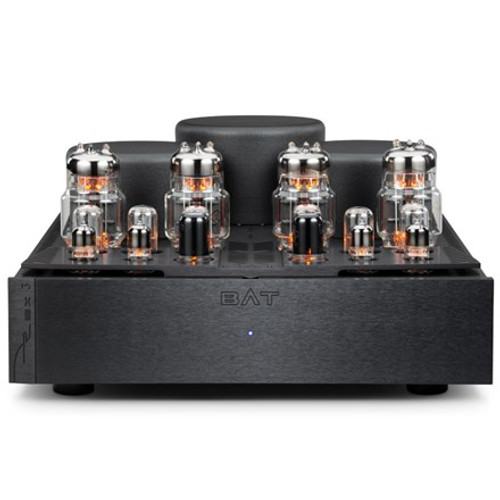 This is the Balanced Audio Technology REX 3 tube power amplifier: Sit back and hear it – nay, your music – roar with life. From the plug-and-play simplicity provided by its auto-biasing and electronic protection circuits, to the palpable illusion of recreating the original musical event in your home, to the all-new Cardas Audio Litz wiring in the internal interconnect, REX 3 is the definition of reference and the ultimate expression of BAT's purist approach to creating a statement vacuum-tube amplifier. Sonically, you'll experience breathtaking naturalism and lashing speed with inimitable insight into musical textures, details, tones, and expression all the while enjoying effortless power to drive any pair of speakers.

A fully symmetrical single-ended bridge design featuring four signature triode 6C33C tubes with zero global feedback and an extremely short signal path that maintains a linear response in both frequency and phase domains, REX 3 delivers 80 watts per channel (stereo) or 160 watts in full triode mode (monoblock). Its custom-made output transformers are made to BAT's exact specification and have a jaw-dropping wide-bandwidth frequency response from 5Hz up to 300kHz. What's more, BAT's intelligent auto-biasing circuit and fuse-less protection deliver superb ease of use, unstinting reliability, and optimized performance. You'll never need to bias a tube or replace a fuse!

From a technical angle, you can think of REX 3 as two single-ended amplifiers per channel, with their waveforms summed at the output transformer. No direct current flows through the latter, allowing the output transformer to be a truly wide-bandwidth design all the while reducing low-frequency distortion. REX 3 extends the benefits of vacuum-tube current sources to include both the first and second gain stages of the circuit design. Hence, the linearity of the gain stage improves, the adjustments for the first and second gain stages become independent, and the tube current source components operate at a lower stress level. Want flexibility? REX 3 lets you fine-tune the sound to best match your individual preferences.

Aesthetically, REX 3 practically shouts "beefiness" via its stately tube complement, massive transformers, and imposing heft. BAT's logo has even been refreshed to clearly communicate its engineering philosophy: The symmetry of the three letters (with the "A" serving as a fulcrum) represents the company's famed balanced circuit design.

When you hear REX 3 in your own system, you'll come to understand the logic of its painstaking design – and realize why it took 25 years for BAT to arrive at this marvel of audio ingenuity. REX 3 provides experiences words cannot adequately describe. Hear it for yourself with a risk-free in-home audition backed by our 100% Music Direct Satisfaction Guarantee.

"The world's finest products offer a level of intimacy and involvement that sets them apart from the rest. That's what the REX 3 delivers—a level of sonic intimacy that you won't want to let go if it grabs you. And you won't find it anywhere else. Truly a fantastic experience."
—Jeff Dorgay, TONEAudio, Product of the Year Award

REX 3's advanced design eliminates the constant need to set and readjust the proper bias of the output tubes. An intelligent automatic-bias circuit adjusts for changing line voltage and aging tubes. For convenience, LED indicators show the status of each individual output tube. BAT further extends REX 3's plug-and-play nature with a novel fuse-less protection circuit that eliminates the power-supply rail fuses to provide both a more refined sonic performance and user-friendly experience. If an output tube becomes over-stressed, you only need to flip the power switch. No tubes to bias. No tube fuses to replace. It doesn't get any easier!

Just as BAT worked closely with Cardas Audio to improve its second-generation preamplifier and DAC output transformers, the company also selected an entirely new internal interconnect – constructed of the finest Cardas Audio Litz wiring – for the REX 3 power amplifier. Put simply, it is by far is the most expensive wire BAT has used in any component. Nothing was spared in the development of the REX 3 system. To complement Cardas Audio's wiring, BAT chose the finest copper-foil oil capacitors to replace its long-term oil caps.

All REX 3 models replace the previous generation's steel fabricated parts with a new all-aluminum chassis and improved venting patterns to maximize ventilation and thermal dissipation for long life and reliability of all tubes and critical components. REX 3 debuts as the manufacturer's first tube amplifier available in an entirely silver-finished chassis. In addition, BAT's logo has been refreshed to clearly communicate its engineering philosophy: The symmetry of the three letters (with the "A" serving as a fulcrum) represents the company's famed balanced circuit design.

REX 3 can be easily upgraded from a stereo version to monoblock configuration. Unlike competing designs, there is no need for you to trade-in your amplifier to obtain more power. With REX 3, you can convert your existing REX 3 to a monoblock, and then order a second REX 3 monoblock to match. Technically, the stereo-to-monoblock conversion is accomplished by paralleling the inputs and outputs. In other words, the sound only gets better since monoblock current delivery goes up by a factor of two while the noise floor drops by an appreciable amount. You can even parallel the REX 3 monoblocks by daisy-chaining them together. Want 320 watts per channel of high-current, zero feedback, fully balanced power? Just use two REX 3 monoblocks per side.