Equipment Amplification Power Amp
Price Now $3,999.00
Was $8,000.00
Was
Save $4001.00 (50%)
Questions and Answers
Condition: Open Box
Availability: In Stock
This item is in stock and ready to ship. Depending on the time of day when you place your order, it will ship same day or next business day. 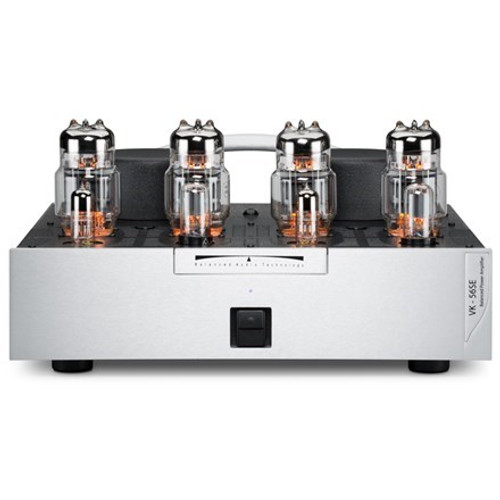 Take the work and worry out of owning a tube power amplifier with the Balanced Audio Technology VK-56SE. The easiest-to-use high-performance tube design on the market, this 52-pound workhorse comes with the same "fuse-less" protection circuit found in BAT's flagship REX II — a novel feature that eliminates power-supply rail fuses to afford more refined performance, deeper detail, and simpler operation. The Stereophile Class B Recommended VK-56SE also has auto-biasing, which means you'll never need to set and readjust the proper bias of the output tubes. A robust 6C33C-B triode tube, paper-in-oil capacitors, and immense energy storage all translate into the kind of dynamics, transparency, realism, and midrange clarity audiophiles dream about hearing. Of course, VK-56SE is entirely balanced to deliver world-class performance befitting your favorite recordings.

"The BAT drove my speakers with a subliminal intensity that made recorded music sound more believable and tangible... That subliminal intensity is the VK-56SE's greatest strength—a strength that's most like the result, at least likely in part, of Victor Khomenko's intelligent repurposing of the 6C33C-B tube. If you already liked tubed amplifiers but are not already familiar with Balanced Audio Technology's distinctive version of tube sound, the VK-56SE is an absolute must to audition."
—Herb Reichert, Stereophile, Class B Recommended Component

"A high level of tonal saturation and wide, yet controlled dynamic swings makes for an almost larger than life presentation. However, this majesty is combined with delicacy, making for an amplifier that sounds like no other."
—TONE, Exceptional Value Award

55Wpc or 110Wpc: Choose the Power Output That Fits Your Needs

Delivering 55 watts per channel in the stereo version or a robust 110 watts per channel as a monoblock, VK-56SE utilizes a 6C33C-B triode output tube that offers many times the current delivery of the 6550/KT90 tube variant used in many traditional tube amplifier designs. VK-56SE also incorporates vacuum-tube current sources for the first gain stage of its design to provide a more soulful portrayal of harmonic texture and instrumental timbre. Your recordings will simply sound more alive while simultaneously yielding greater finesse, grace, and inner detail.

Not only can VK-56SE be upgraded from a stereo to monoblock amp at any time, it incorporates an all-new main board that will allow a full upgrade to the VK-56SE as well. With the addition of its fuseless-protection circuit, all BAT Special Edition or REX tube amplifiers have eliminated rail fuses from their design. And yes, the elimination of these fuses makes the VK-56SE sound even more palpable — digging deeper into the raw emotional power that bestows music with transcendent grace and absorbing detail.