Equipment Amplification Power Amp
Price Now $12,999.00
Was
Was
Save $0.00 (0%)
Questions and Answers
Availability: In Stock
This item is in stock and ready to ship. Depending on the time of day when you place your order, it will ship same day or next business day. 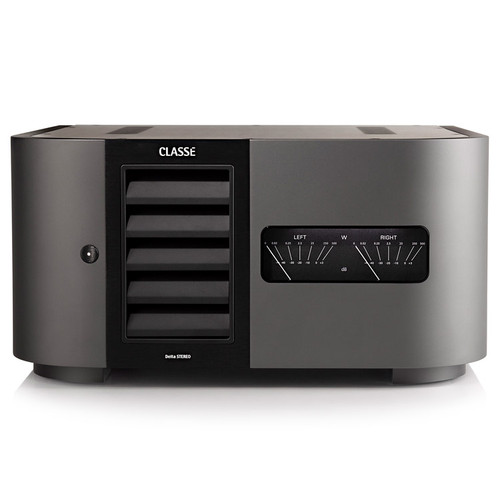 The Classé Delta Stereo power amplifier invites you to imagine what's not there by excelling at what many audio components cannot do – completely get out of the way of the music. Created to be an inconspicuous presence in any system, this robustly constructed amp ensures that the absorbing detail, dynamics, depth, and immediacy that make the difference between hair-raisingly great and average listening experiences come through with levels of engagement, realism, and definition that bring you to the recorded event. Though it may seem counterintuitive to some to invest thousands in an amplifier you will likely not notice is even in operation, Delta Stereo serves as a rare example of an instrument that serves the artists' original intent – and which doesn't possess its own agenda, signature, or sound.

True to the Classé heritage, the 102.3-pound Delta Stereo arrives built for authoritative performance and industry-leading longevity. Assembled in Japan in the state-of-the-art Shirakawa Audio Works factory, and engineered to play with surreal neutrality and clarity, Delta Stereo blends a healthy 250Wpc output with a relatively compact form factor (8.74 x 17.5 x 19.37 inches, HWD). The combination gives you performance that approaches a set of Classé's mono amplifiers in the convenience of a single box. Classé specifically designed Delta Stereo to drive any loudspeaker – including those with low-impedance loads, like Bowers & Wilkins' 800 Series Diamond – with supreme confidence and remarkable headroom. That ability extends to the fact Delta Stereo operates in pure Class A mode for the first 12.5W of operation. If that figure sounds underwhelming in the face of amps that claim herculean output numbers, remember that Delta Stereo provides pure Class A – for which you can reference the two gorgeous VU meters on the front panel. If the needles in the defeatable meters remain to the left of the vertical, you're hearing ultra-low-distortion Class A. Countless audiophiles know there's never been a better method of current delivery.

Indeed, Delta Stereo specializes in control, confidence, balance, and clarity. It cares not one iota about musical tastes. Unlike many high-end amplifiers that favor style over another, and often fall short when it comes to reproducing the transients, speed, and punch associated with uptempo or challenging fare, Delta Stereo is an all-rounder. Poised and resolute, it helps convey the specific architecture of the music while keeping intact the instrumental and vocal character, expansiveness, and breadth. Delta Stereo's ultra-low harmonic distortion (less than 0.0007% at 1kHz measured at 90kHz) and spectacular frequency response (1Hz-650kHz) attest to its capabilities. Ditto its outstanding signal-to-noise ratio (118dB). But the real test is hearing it in action – and never noticing it's really there.

Not that you won't stare at Delta Stereo's beautiful exterior. In addition to the backlit VU meters on the front panel, you'll find a key part of Classé's trademarked ICTunnel intelligent cooling system. A simple LED standby/on button is the only other noticeable visual set against the sleek, wrapped, extruded aluminum chassis. Delta Stereo's appearance is a leading example of form-follows-function design manifested in a supremely logical manner. Consider that the louvered ICTunnel intake vent serves as a way for the Class A-generated heat to be dissipated in a way that doesn't require heat sinks. It works in concert with a dead-quiet thermostatically activated fan inside, which expels air (and heat) through a rear exhaust port. The upshot: The casing of Delta Stereo never runs warm to the touch; the only warmth is located around the rear exhaust port. Another advantage: Given sufficient rear ventilation, Delta Stereo can be vertically stacked or put in a rack or cabinet without running the risk of overheating.

Classé's innovative cooling system is far from the only cutting-edge aspect found inside (or outside) Delta Stereo. A massive toroidal transformer hand-wound with nearly a third of a mile of copper wire, complete with separate secondary windings for each channel, accompanies 22 four-pole Mundorf capacitors that supply tremendous energy storage. Hand-laid, six-layer circuit boards with identical signal paths for the left and right channels and a MOSFET output stage are also onboard. On the rear panel, four sets of some of the industry's finest binding posts – Furutech-made, five-way, rhodium-plated connectors with torque guard protection – complement XLR and RCA inputs and expansive connectivity that accommodates IR remote, DC trigger, USB, Ethernet, RS-232, and Classé's own CAN-Bus network. For iron-clad stability, Delta Stereo rests on Navcom footers specifically tuned to the weight of the amplifier. Classé even supplies a formidable, temperature-immune power cord tailor-made for Delta Stereo by DR Acoustics. Woot!

For additional assurance, Classé instills Delta Stereo with numerous protection circuits – output overload, short circuit detection, DC offset, temperature sensitivity – to protect both the amplifier and your loudspeakers against dangerous fault conditions. Importantly, these money- and headache-saving features do not interfere or limit daily performance but instead shift Delta Stereo into protection mode when confronted with abnormal conditions. Add to these safeguards Music Direct's 100% Satisfaction Guarantee, and Delta Stereo has it all – and then some.

We'd love to talk with you more about this exceptional piece of gear. To arrange for a risk-free in-home audition, contact one of our audio consultants today!

"A perfect performance, like a perfect 10 in the Olympics. The Classé Delta Stereo amplifier is a dream machine for music lovers and home theater enthusiasts living the audiophile lifestyle. ...The only appropriate term for how the Classé Delta Stereo performed in my system is ‘perfectly.'"
—Home Theater Review, 2022 Editors' Choice

"The Delta Stereo power amplifier is all about control, power and authority. It takes a very tight grip of the loudspeakers and forces them to perform to a really high level. It always feels powerful and refined and well within itself at all times, even when playing at extreme volume levels... The tonal balance is one of absolute naturalness and proficiency."
—Stereonet, Product of the Year Award

"Classé's Delta Pre and Stereo are impeccably designed and manufactured products that offer impressive operational flexibility and dependability. The amplifier provides enough power to handle just about any loudspeaker you'd care to send its way. These two components are visually appealing and practical to install in a domestic setting. And they ‘sound good,' meaning that they get out of the way and let the fundamental character of a recording be determined by the engineers involved."
—The Absolute Sound, Editors' Choice Award