Equipment Amplification Power Amp
Price Now $8,099.00
Was $9,499.00
Was
Save $1400.00 (15%)
This product is not eligible for further discounts.
Questions and Answers
Availability: In Stock
This item is in stock and ready to ship. Depending on the time of day when you place your order, it will ship same day or next business day. 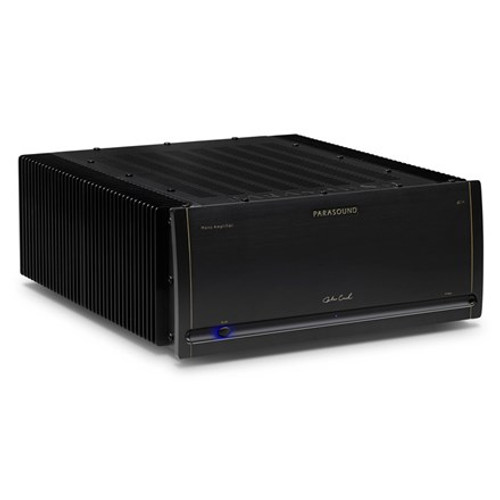 The Parasound JC 1+ is nothing less than the finest-performing mono power amplifier in the company's fabled four-decade history – and arguably the most inspired creation ever made by legendary designer John Curl. Developed over the course of five years, and held back for a full year of rigorous testing even after Curl and his associates signed off on its completion, JC 1+ stands as one of the quietest-operating and profoundly dynamic amplifiers you'll ever have the fortune to encounter. Simultaneously, this Curl-dubbed "stump puller" provides 180 amps of peak current – enough to drive literally any commercially manufactured speaker with ease. Curl engineered JC 1+ to practically be allergic to distortion – and all its negative impacts, including listener fatigue.

While the sleek front panel remains straightforwardly elegant with a power LED indicator, the back panel speaks to JC 1+'s functionality. A two-position toggle switch (to select normal bias and 25 watts in pure Class A or lower bias and 10 watts in pure Class A), gain toggle switch, and AC master switch abet a clean layout featuring balanced Neutrik locking-type XLR input and loop input connectors as well as unbalanced Vampire RCA input and loop output connectors – making it simple to connect multiple JC 1+s for bi-amping or looping the signal to a subwoofer equipped with an XLR input. Two pairs of proprietary 24k-gold-plated spinner-style speaker terminals accept up to 16mm-wide spade lugs, bananas, and up to 5AWG bare wire. JC 1+ even boasts auto turn-on circuits with 12V trigger jacks and provided rack-mount hardware.

In every regard, JC 1+ will do for your music what you've likely only dared to dream. Parasound's five-year manufacturer warranty and our 100% Music Direct Satisfaction Guarantee ensure your fantasies become realities.

"Using the Parasound JC 1+ in two separate listening rooms and with four different speakers, my impressions are thus: These amps have a cleanliness and abundance of power that works very well to unlock the potential in a lot of speakers, especially ones with a complex crossover and large impedance swings. The sound has plenty of detail, without being etched or glassy sounding. Imaging properties are truthful if not voodoo-like. The Parasound JC 1+ does many things very well and nothing wrong. I was truly engaged on many nights while listening."
—Dave McNair, Part-Time Audiophile

"This is a superb-sounding amplifier that will get the best from every loudspeaker with which it is partnered. Well done, Mr. Curl."
–John Atkinson, Stereophile

"The sound is exemplary and one would expect that from the...price, but high price is no guarantee of quality for any product. It has to be verified. Proof of Performance for the Parasound has been verified. They are worth the price."
–The Secrets of Home Theater and High Fidelity, 2020 Best Monoblock Power Amplifier Award

"If this amplifier had a boutique-y badge on the front panel, you'd ay $50K for a pair of these, and be on social media tomorrow bragging about them. That's why at [the price], they are the big amplifier deal of all time."
–TONEAudio, Product of the Year Award

John Curl is a master at eliminating undesirable electronic noise. For JC 1+, he specified a pair of Bybee Music Rails that are active high-frequency noise filters that "scrub away" every vestige of noise on the input and driver stage B+ and B- rails. These ingenious and patented devices were conceived by Jack Bybee and invented by an eminent microwave engineer and audiophile in collaboration with Curl and noted circuit board designer Carl Thompson. Carl is known for designing the circuit boards for Curl's Vendetta Research phono stage, and the Parasound JC 1, JC 2 BP, JC 3+ and JC 3 Jr. To optimize their effect, Carl designed Music Rail circuit boards exclusively for JC 1+, the first commercial product to employ these remarkable devices. As in JC 1, the JC 1+ input stage uses hand-matched pairs of Toshiba 2SJ74 P-channel and 2SK170 N-channel JFETs. These coveted devices remain unmatched for their low noise. Parasound is one of the few companies that has invested heavily to secure an ample stock of these rarest of all JFETs. JC 1+ employs FR408 circuit board substrate for the critical input and driver stages. FR408 was invented for ultra high-speed applications in super computers and aerospace. Carl recommended FR408 for its superior propagation of high frequencies that outperforms Delrin. Parasound's obsession with eliminating noise that pollutes sound quality led it to add shielding to this board to isolate it from internal stray currents that might diminish its perfection. The JC 1 driver stage was an excellent single-stage circuit. Curl predicted that a two-stage cascode driver would make a substantial performance improvement because a driver circuit with cascode topology has some of the favorable attributes of vacuum tubes, namely higher input-output isolation, higher input impedance, and higher output impedance. Its greater bandwidth and open loop gain were expected to improve linearity and a noticeable improvement in sound quality. This proved to be true.

John Curl affectionately referred to JC 1 as a "stump puller" because its 135 amp peak current enabled it to drive any commercially manufactured speaker with ease. Over the years, he has observed an increasing number of high-performance speaker manufacturers employ lower impedance to achieve their sonic objectives. Impedance dips below two ohms are not uncommon. Such punishingly low impedances increase an amplifier's odd higher-order harmonic distortion, a primary cause of listening fatigue. Driving low-impedance speakers doesn't necessarily require more watts, but higher current is imperative. Parasound raised the JC 1+ peak current to 180 amps with the addition of six Sanken 15A/230V/60Mz bipolar output transistors, for a total of 24. Accommodating six more output devices necessitated changing the output stage circuit board's orientation from horizontal to vertical. This added welcome benefits of more effective heat dissipation and easier serviceability. To conduct higher current flow in the JC 1+ we made the copper traces on its main circuit board and N and P channel output stage circuit boards twice as thick as on JC 1. Supporting this substantial current required an even more potent power transformer. The massive 2.1kVA transformer weighs 30 lb. Developing this power transformer was challenging and required 11 hand-made samples before Parasound achieved the necessary power and total absence of mechanical vibration. The JC 1+ power transformer accomplished this with an especially potent and expensive steel core. To unleash greater dynamics, JC 1+ uses six 33,000uF Nichicon Gold Tune capacitors, a prodigious total 198,000uF. Gold Tune capacitors are among the finest capacitors ever designed specifically for high-end audio applications. Although these Gold Tune capacitors were discontinued years ago, Nichicon continues to manufacture them exclusively for Parasound.