Equipment Amplification Preamp
Price Now $11,995.00
Was $14,995.00
Was
Save $3000.00 (20%)
Questions and Answers
Condition: Open Box
Availability: In Stock
This item is in stock and ready to ship. Depending on the time of day when you place your order, it will ship same day or next business day. 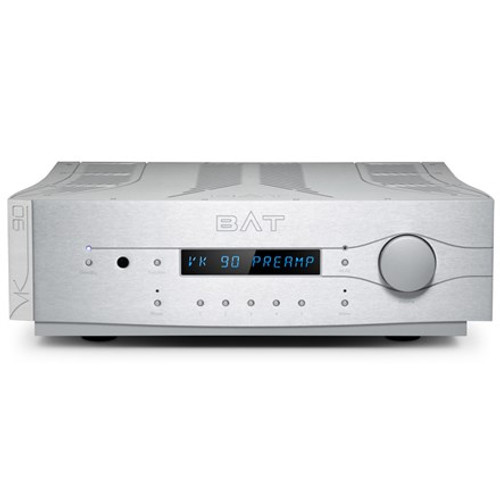 Boasting one of the most flexible user interfaces in the industry, VK-90 offers customizable options that range from dimming to fading and source-naming. It can also be fully upgraded to a REX 3 preamplifier. And you can always get the volume just right courtesy of a proprietary electronic shunt volume attenuator that offers 140 steps of 0.5dB resolution. In the design, discrete metal film resistors bleed the unused signal to ground. From deep bass to extraordinary dynamics and layered transparency, VK-90 is your new reference.

More than a decade ago, BAT introduced the world to the 6H30 SuperTube. VK-90 continues the tradition by using eight 6H30 SuperTubes to form an extraordinarily high-current, low-impedance drive engine. As BAT wrote upon introduction, "comparing the 6H30 tube to a standard 6922 is like comparing a Formula 1 race car to a family sedan." In VK-90, the signal is effectively transmitted through only one gain stage. The Unistage circuit provides the ultimate simplicity of amplifying the incoming signal only once, while using no global feedback to double back on the straight-through signal integrity.

VK-90 touts Balanced Audio Technology's all-new, third-generation SuperPak in its power supply design. It's a significant rethinking of what is possible from an energy storage device. For the first time, the BAT SuperPak features hybrid construction that incorporates two capacitors built and potted into each individual shell. An additional silver-in-oil capacitor – arguably the finest-quality capacitor offered at any price – is used as part of the Gen 3's construction. The two capacitors are then assembled into a new low-resonance shell. The result: Low-level detail is revealed in a clear and unforced manner, while the overall sound has a beguiling sweetness and naturalness from top to bottom.