Equipment Amplification Preamp
Price Now $3,999.00
Was
Was
Save $0.00 (0%)
Questions and Answers
Availability: In Stock
This item is in stock and ready to ship. Depending on the time of day when you place your order, it will ship same day or next business day. 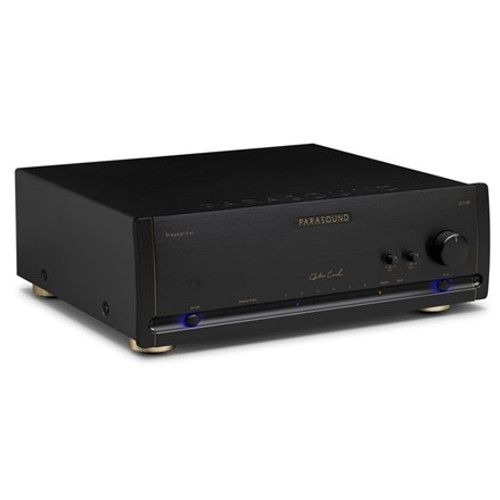 Designed by audio wizard John Curl, the Parasound JC 2 BP does everything you would expect a flagship high-end linestage preamplifier to do – and then some. And it does so with majestic results. Complete with home-theater bypass for both unbalanced and balanced inputs/outputs (just press a button on the remote and the signals from your pre/pro or receiver pass through, unaffected), and direct DC servo-coupled with no capacitors in the signal path, it seamlessly blends into any surround system while offering a full suite of connectivity, remarkable fidelity, and modern versatility. As for quiet? You won't ever notice JC 2 BP is operating. But you'll definitely experience inviting degrees of air, texture, dynamics, and resolution from favorite recordings and new discoveries.

And that's not all. A four-gang motor-driven analog master volume control, separate TKD analog gain controls for the left and right channels, discrete IR codes for the supplied full-function remote, and no fewer than four 12V trigger outputs for power-amplifier auto turn-on join a two-way RS232 port and loop out jacks located on the aluminum rear panel. If you want to mute JC 2 BP, you'll do so in style, given the function gets performed by independent left and right relays. Parasound's five-year manufacturer warranty and our 100% Music Direct Satisfaction Guarantee round out the lengthy advantages wrought by a preamplifier ready for the audio (and video) enthusiast.

"The JC 2 BP is that extreme rarity – a near-reference-quality product that many of us can afford. Neutral and natural, transparent-to-sources, quick and delicately detailed, here is one solid-state preamp that doesn't trade away key parts of the baby (air, bloom, color, three-dimensionality) for the bathwater of razor-cut imaging and iron-fisted control."
– The Absolute Sound, Editors' Choice Award

"Parasound and John Curl got it very right. And at a price that will be within the reach of real-world audiophiles."
– John Atkinson, Stereophile

"It's becoming increasingly obvious how few preamps succeed in passing a musical signal without imposing crippling constriction in the process – and those that can are invariably expensive. Well, you can add the JC2 to that (very short) list of the great and the good."
– Hi-Fi+

"The Parasound Halo JC 2 is a 'semi-mass-produced' preamp that has the sound of small-production-run 'boutique' gear."
– Positive Feedback