Equipment Amplification Receiver
Price Now $5,499.99
Was
Was
Save $0.00 (0%)
Questions and Answers
Availability: In Stock
This item is in stock and ready to ship. Depending on the time of day when you place your order, it will ship same day or next business day. 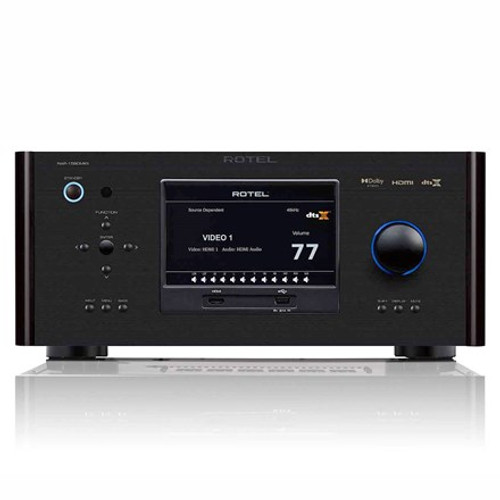 Engineered for memory-making performance and home-theater lovers that also demand engaging music, and complete with Dirac Live LE room correction, the Rotel RAP-1580MKII surround receiver makes it possible to control and enjoy high-end audio and video from a single component. Matching the capability of many separates while taking up a fraction of the space, it combines a multichannel integrated amplifier with surround processing abilities that cause all entertainment to pop with color, dynamics, and realism. A Class AB design that outputs a walloping 100Wpc across seven channels, and bolstered by an in-house-manufactured toroidal transformer, RAP-1580MKII also uses six premium Wolfson 24-bit/192kHz DACs – all supported by first-rate circuitry and parts. Friends, this is not your ordinary receiver.

Refined, intuitive, and flexible, RAP-1580MKII arrives equipped with eight HDMI inputs with 4K pass-through and two HDMI outputs for stunning connectivity options. Three of the former and both outputs support HDCP 2.2. A seven-inch TFT front-panel display invites you to dial-in any adjustment and parameter you desire, all without having to turn on your video screen. RAP-1580MKII also touts a full suite of custom-integration features (RS232 and 12V trigger out included), a front-panel HDMI input with 4K pass-through, front-panel iOS USB input, integrated aptX Bluetooth, and PC-USB input that handles 24-bit/192kHz. And let's not forget Dirac Live LE. Supplied with a USB measurement microphone, it delivers incredible room correction and help you improve everything from bass response to treble clarity.

When it comes to reproducing audio and video in stunning fidelity, RAP-1580MKII remains true to Rotel's proud hi-fi legacy. Look to the balanced XLR inputs for instant confirmation. This 50.3-pound monster further invites you to spin vinyl LPs through its built-in MM phono preamplifier and hook up other sources, like CD players and tuners, via its assortment of RCA line-level inputs. Dolby DTS:X, Atmos 7.1.4, and DTS-HD Master Audio decoding are onboard, as is a 10-channel parametric EQ for optimizing your room's acoustics. Need more? A slew of multichannel inputs, preamplifier outputs, and six digital inputs permit you to go wild.

Aesthetically, the 7.44 x 17 x 18.5-inch (HWD) RAP-1580MKII takes on the look of a champion. Its formidable appearance, rock-solid chassis, and vibration-damping feet project a confidence that mirrors its technical and emotional prowess. A two-year manufacturer warranty and our 100% Music Direct Satisfaction Guarantee do the rest.

Here's a prime example of Rotel's Balanced Design Concept in action: Capacitors are available in the same specification at many quality levels. An important use of capacitors in an amplifier is to filter unwanted current ripples from the power supply and provide reserve power when it is needed the most. A low-cost electrolytic capacitor may meet the basic spec required, however, there will be significant negative impact on sound quality if an inferior capacitor is used. Rotel selects a premium capacitor that provides better performance across both power and frequency spectrums to produce a more accurate and musical reproduction of the audio signal. High-quality power supply capacitors provide a more efficient transfer of energy with fast charging and discharge time to ensure the circuits have the reserve power when needed. At each stage of development, Rotel engineers listen to circuit prototypes and revise the design when they feel they can gain a sonic advantage by using a particular component from another manufacturer or by specifying tighter tolerances. Since Rotel is an independent manufacturer, it is free to source parts from highly respected suppliers around the world to fit their requirements. A few include:
"Slit Foil" and T-Network electrolytic capacitors from the UK; Rubycon electrolytics capacitors from Japan; LCR polystyrene capacitors from Wales; high precision thermal and frequency stable metal film resistors designed in the U.K.; Analog Devices, Texas Instruments, and Burr-Brown ICs from the United States.