Equipment Cable
Price Now $99.95
Was
Was
Save $0.00 (0%)
Questions and Answers
Availability: In Stock
This item is in stock and ready to ship. Depending on the time of day when you place your order, it will ship same day or next business day. 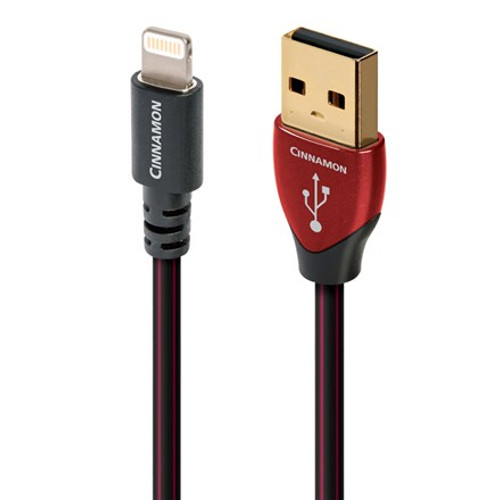 For those looking to get more performance from their new i-Device, Audioquest Cinnamon USB-to-Lightning offers truly inspiring performance. Built around a core of excellent materials and top-tier engineering, Cinnamon USB-to-Lightning puts the full weight of the music back into your listening experience. The secret is in AudioQuest's unyielding commitment to quality. Every aspect of Cinnamon's construction, from the type of connectors used to the direction of the conductors has been scrutinized, auditioned, revised and perfected to create a Lightning cable that offers tremendous performance at a very affordable price.

"...with the Cinnamon USB, we found that the sound of our set-up gained smoothness and a sense of authority. Our kit served up a sweet-sounding treble, and well-integrated midrange, while the bass was sure-footed with nice weight to its delivery."
– What HiFi?

Digital Audio over USB
There are significant, audible differences between USB cables. We're not sure how this is possible, since USB is purported to be a purely digital interface, however, the sonic differences are repeatable and consistent from system to system. A better USB cable makes a better digital audio cable, period.