Equipment Disc Player
Price Now $429.00
Was
Was
Save $0.00 (0%)
Questions and Answers
Availability: In Stock
This item is in stock and ready to ship. Depending on the time of day when you place your order, it will ship same day or next business day. 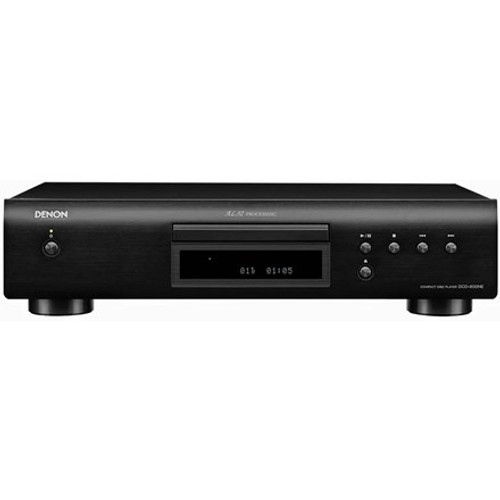 The CD format lives on, and Denon's DCD-600NE CD Player is a great illustration of why the compact disc continues to be so satisfying to so many music lovers. Many audiophiles who are seeking a high-quality, affordable CD player turn to the DCD-600NE as the ideal choice. The combination of Denon's proprietary AL32 Processing technology and an innovative circuitry structure ensures that recordings are accurately reproduced. Under the hood, the DCD-600NE features an ultra-precise, 32-bit/192kHz digital-to-analog converter (DAC).

The circuit patterns in the DCD-600NE are carefully engineered to make signal paths as short as possible. With layered circuit boards and shorter circuits, any interference between circuits and left and right channels is reduced, and the adverse influences on audio signals are minimized. As a result, the circuit paths in the DCD-600NE reproduce sound that's clean, highly transparent, and beautifully faithful to the original recording.

The DCD-600NE CD Player's vibration-resistant design reduces the adverse effects of heavy components within amplifiers so that the sound quality meets Denon standards. The power transformer is fitted immediately above the insulators to prevent unwanted vibration. By placing the transformer close to the foot, the vibration surrounding the chassis is reduced, resulting in pristine sound. This elegant, proven design is referred to as Direct Mechanical Ground Construction. With a metal bracket connecting the CD mechanism and chassis to the high-density feet, unwanted resonance is further reduced to deliver pristine sound.

Additionally, the DCD-600NE features a sturdy metal chassis to achieve high mechanical stability to suppress vibration caused by disc rotation. Plus, the DCD-600NE features an optical output to connect to the digital input of an amplifier or AV receiver. For an extraordinary sonic experience, you can listen to your favorite music with the Pure Direct Mode, which prevents coloration of the signal. What you hear is cleaner, more detailed, authentic sound, faithful to the original recording.

The DCD-600NE can gracefully handle multiple formats: CD, CD-R/RW, MP3, and WMA. This player and its parts are thoughtfully selected, carefully engineered, and definitely built to last. Like all Music Direct products, the Denon DCD-600NE CD Player comes with the 100% Music Direct Satisfaction Guarantee.

"A four-layer circuit board, shorter signal paths and better components, ... and the 'Pure' mode provide numerous more in-detail improvements, which should result in a particularly stable and precise image.... [The Denon DCD-600NE CD player and the Denon PMA-600NE integrated amplifier are] the perfect beginner's system you can easily recommend to your best friend for maximum fun, at a tight budget. It sounds good and offers everything you need at this level — and you won't regret anything."
—Tom Frantzen, Stereo Magazine

"[This is] a simple machine ... [that] feels good in use.... If you're looking for a CD player and don't have a lot of money, or your old CD player crapped out ... this one, the Denon DCD-600NE, would be a fine place to start — or continue — your CD odyssey."
—Steve Guttenberg, The Audiophiliac (YouTube)

Denon's proprietary analog waveform reproduction technology called AL32 Processing utilizes data interpolation algorithms. They add in the points that should exist before and after large quantities of data, smoothing out the waveform and restoring information that was lost during the digital recording. The resulting playback is highly detailed, free of interferences, richly expressive in the lower range, and beautifully faithful to the original sound. AL32 Processing allows you to experience songs exactly as the artist intended.