Equipment Disc Player
Price Now $15,000.00
Was
Was
Save $0.00 (0%)
Questions and Answers
Availability: In Stock
This item is in stock and ready to ship. Depending on the time of day when you place your order, it will ship same day or next business day. 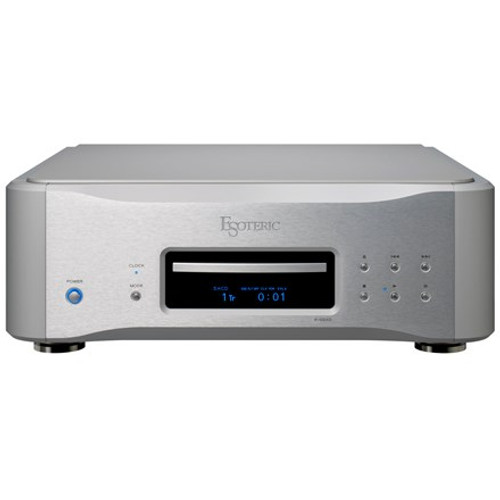 Two leading-edge features developed for Esoteric's flagship component – specifically, the VRDS-ATLAS SACD transport mechanism and Master Sound Discrete DAC – elevate the Japanese-made K-03XD SACD player/DAC to elite status in terms of performance, sonics, technology, and build quality. You won't soon get over how amazing your discs will sound. The incredible dynamic range and resolution achieved by the pair of innovations deliver everything from symphonic crescendos with an expansive spectrum of tones to pop favorites with breathtaking depth and vivid realism. In short, K-03XD takes digital to a nearly unimaginable plane – a promise that extends to USB ports that support 22.5MHz DSD and 32-bit/384kHz PCM, MQA decoding, and the ability to convert PCM to DSD. 100% Music Direct Satisfaction Guaranteed.

As the quietest and most elegant transport in VRDS' three-decade-plus history, VRDS-ATLAS also epitomizes the company's resolute focus on mechanical grounding in order to more effectively reduce vibration. Adopting a wide, low-profile design for the entire transport mechanism helps achieve a lower center of gravity, while the relocation of the turntable motor to below the turntable from its previous position above the bridge dramatically shortens the route for grounding vibration and reducing mechanical noise. Tray hollowing is further minimized for increased rigidity, and special stoppers made from vibration-absorbing elastomer cancel out resonance when the tray is in its closed position. What's more, the entire mechanism resides centrally within the chassis and remains fixed to a 5mm-thick steel bottom plate and supported by three proprietary pinpoint feet. The chassis' internal structure boasts a double-deck design, with the audio boards on the upper level and power supply circuits and transformers on the lower level to minimize magnetic flux leakage and vibration.

Playing with uncanny energy and realism that make you feel as if you're witnessing a live music event, the Master Sound Discrete DAC consists of 32 elements per channel. Each DAC element includes clock drivers, logic circuits, capacitors, resistors, and other component parts, while each group of 32 elements remains isolated from the main parts. In keeping with premium design philosophy, the DACs are packed with a luxurious selection of state-of-the-art components to ensure pure, effortless output. Relatedly, K-03XD's independently developed Delta-Sigma modulator supports 64-bit/512Fs and 22.5MHz DSD and 768kHz PCM. The FPGA's dedicated digital processing algorithm is exclusively developed exclusively for the Master Sound Discrete DAC and fully optimized for outstanding playback of both DSD and PCM.

Of course, the transport and DAC serve as just two parts of the K-03XD story. To wit, a reference-setting power supply – with two high-capacity toroidal transformers with independent power supplies for the digital and analog circuitry – accompany low-feedback DC power regulators that minimize feedback in a discrete configuration that eliminates integrated circuits by way of technology originally developed for the Esoteric Grandioso P1X/D1X. A total of 26 super capacitors (650,000uF) reside in K-03XD. Equally impressive, the superlative Grandioso Custom VCXO II clock – also originally made for Grandioso P1X/D1X – claims hyper-low phase noise and phenomenal center precision. What's more, K-03XD can be connected to an Esoteric Master Clock Generator for even better fidelity, with internal circuits synchronized to a 10MHz clock that offers the same high precision as an atomic clock.

Last but not least, K-03XD aces connectivity. In addition to XLR and RCA line connections, the 61.75-pound unit includes Esoteric's ES-LINK Analog method of current transmission. Taking full advantage of the HCLD buffer circuit's powerful current supply ensures K-03XD is less susceptible to the detrimental effects of impedance on the signal route. It also enables a more powerful signal transmission, fully driving connected compatible devices. RS 232 and trigger inputs, a semi-floating top panel, a gorgeous remote control, and three-year warranty round out a work of art you need to hear in order to believe.

Esoteric VRDS Trasport Mechanisms
Having undergone more than three decades of progressive evolution and advancements, Esoteric's VRDS (Vibration-Free Rigid Disc-Clamping System) firmly clamps the disc onto a turntable of the same diameter, eliminating both the rotational vibration of the disc itself and the effects of any extraneous mechanical vibration. Any latent disc warpage is also corrected by the turntable to significantly improve the relative optical axis accuracy of the optical pickup and the disc pit surface, while also minimizing servo current. Translation: Exponentially reduced disc read error and stunning sonics.

ESOTERIC-HCLD Output Buffer Circuit
The ESOTERIC-HCLD output buffer amplifier boasts an astonishing high-speed slew rate of 2,000V/µs. Current transmission and speed – the most important factors in the design of any analog output circuit – have been pushed to the limits to reproduce the reality of music with a dynamic range that is truly breathtaking.

Advanced Quality Control
With a discrete DAC, where component tolerances are directly linked to arithmetic precision, highly advanced quality control is also required for the manufacture of electronic circuit boards. Esoteric's own in-house factory boasts some of the world's leading board mounting technologies, such as soldering performed in an oxygen-free furnace, which is located in a clean room featuring the same level of cleanliness found in a hospital operating room. Technologies cultivated in the production of electronic circuit boards for audio, medical, aerospace, and defense industries support the high production quality of the Master Sound Discrete DAC.