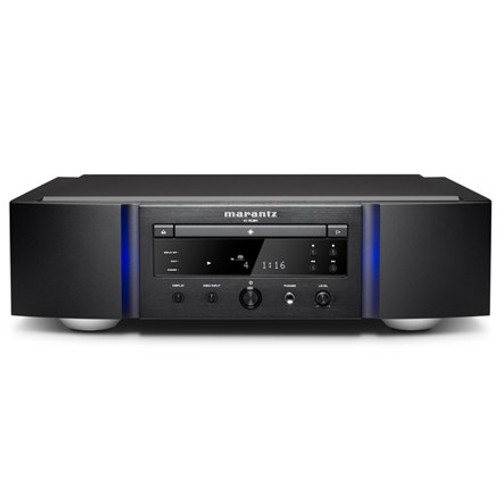 Ken Ishiwata, the designer behind the many of the most acclaimed CD players of the past 35 years and the Marantz icon who stands as arguably the most influential active figure in the hi-fi industry, believes hearing music should be a singular experience. That philosophy has driven him to develop playback gear of exemplary merit – blue-sky models that transcend the notion of mere machines and manifest a rare mixture of realism, expressiveness, and naturalism that make listening an incomparable experience. The Japanese-built SA-KI Ruby is such a product, an extremely special SACD/CD player and DAC devised to commemorate Ishiwata's 40th anniversary with Marantz and demonstrate music's unlimited potential to directly connect with our souls when it is presented with no-unfettered purity, clarity, and liveliness.

Appointed with a classy ruby motif, fine-tuned by Ishiwata himself, and limited to only 1,000 units worldwide, SA-KI Ruby represents the legendary engineer's unrivaled devotion to tireless critical listening – a pursuit that makes each component he creates for Marantz completely unique and distinguished from the products of any other manufacturer. The globally recognized Ishiwata touts one of the most astute ears in the business. His dedication to repeat testing, blending, auditioning, refining, and testing again until the sonics of a given component exceed his demanding criteria translate into otherworldly involvement. With SI-KI Ruby, you are investing in a SACD/CD player and DAC that is far more than an example of cutting-edge technology. You will own an discerning device that pulses with human soul spirit, provides life-nurturing journeys, and benefits from the bespoke tuning of a master.

Derived from the flagship SA-10 and designed by the same Marantz team, SA-KI Ruby features a brand-new, in-house-designed disc mechanism strictly built for audio – the SACDM-3, which plays SACDs, CDs, and compilations on CD-ROM or DVD-ROM. SA-KI Ruby's asynchronous USB input supports high-resolution formats up to 32-bit/384kHz PCM/DXD as well as DSD11.2MHz. All digital music is handled via with Marantz Musical Mastering – a fully balanced proprietary technology that involves two stages: MMM-Conversion and MMM-Stream. In the former, dedicated master clocks guarantee all digital signals get directly upsampled to DSD256 (four times the SACD standard) without any need for sample-rate conversion. Because the output from the 1-bit direct MMM-Conversion process is an extremely high-frequency stream of single pulses, it's already an analog signal that requires nothing else than a benchmark low-pass filter to offer the purest-possible analog output. Enter MMM-Stream, which completes the enviably elegant digital-processing equation. The result: A sonically enthralling process that fully makes the best of digital music without introducing any artifacts that require more post-conversion processing.

In addition to 1-bit direct DSD to analog conversion, SA-KI Ruby also touts a brand-new analog output stage equipped with HDAM-SA3 and HDAM-SA2 modules as well as a low-impedance output. A toroidal transformer, dedicated headphone amplifier with all-discrete construction and HDAM-SA2 modules, and isolation of the USB from the digital inputs to block external and internal noise further elevates the engrossing fidelity on this gem of a musical instrument. And what fidelity you'll enjoy: Extreme textural detail, effortless dynamic contrasts, you-are-there presence, rhapsodic separation, and involving tones that put you face to face with your favorite artists.

Graced by a laser-engraved "Ken Ishiwata" signature on the top of the front panel and copper-plated chassis, SA-KI Ruby delivers on the profound possibilities always promised by CDs and SACDs. Marantz's five-year parts-and-labor warranty and our 100% Music Direct Guarantee crown a signature piece meant for singular listeners.

"I doubt you can buy a better built and finished player for the money than the SA-KI Ruby. Maybe that's why it's limited to 999 units in gold and the same quantity in black. The fact that it provides such a stonking DAC on top of a highly finessed CD player makes it the perfect transition product for those making the leap to streaming."
—Jason Kennedy, Hi-Fi+, 2019 Disc Player or Transport of the Year Award

"[It] is equally impossible not to be impressed by the value they offer. Think about it: You have a 100Wpc amplifier (typically 150W or more); a preamplifier with a phonostage and a number of useful features; and an SACD/CD player with a built-in DAC that together will handle virtually every digital medium for the playback of music in the home – all of superlative performance, plus quality of build, parts, manufacturing, and workmanship that cannot be faulted."
—Paul Seydor, The Absolute Sound

"Ishiwata judged the Rubies his finest work. They are surely as fitting a valediction as he could desire, realizing as they do his highest ideals in the reproduction of music in the home."
—Paul Seydor, The Absolute Sound, Golden Ear Award

"Resolution, including richness of details and instrumental textures, was higher than expected, especially given these less-than-stratospheric price points. Good news for music lovers who (like me) enjoy multi-genre material: The Ruby components seemed to fare well across a broad spectrum of styles."
—Julie Mullins, The Absolute Sound

"Not just noteworthy in their own right, these two components gel together to create a sound that's pure 'Marantz'. Appealing to a wide range of listeners, there's no sense of a celebratory rosy red glow that might otherwise embellish the sound of disc player or amplifier. They will surely be snapped up by Marantz fans and collectors, but their performance will delight even without the halo of their backstory."
—Andrew Everard, Hi-Fi News, Highly Commended product

"The Ruby KI exhibits the warmth, richness, and dimensionality traditionally associated with tubes together with the precision, definition, transient attack, bottom-end extension, and impact for which solid-state is prized."
—The Absolute Sound, 2020 Product of the Year Award

Ken Ishiwata has been at the heart of Marantz for 40 years, but his influence extends beyond the many wonderful products he has developed for the company during that time. He is now perhaps the most recognized and influential figure in high-end audio, with an avid following among the hi-fi press and discerning consumers stemming from his ability to design and tune products that bring listeners closer than ever to their favorite music. He has a unique ability to conceptualize stunning sound reproduction, design the equipment required to achieve it, and deliver enthralling demonstrations around the world – leaving listeners spellbound with the new insights Marantz products deliver into even the most familiar music. KI-Ruby goes beyond even the standards of past KI-Signature achievements, embodying all of Ken Ishiwata's experience and expertise, as well as that of the Marantz engineering team. Since the original CD63 MkII KI Signature CD player was launched more than 20 years ago, the knowledge of how to make a fine-sounding product seem magical has grown with each new KI Signature launch.

In exploring and examining every aspect of every design, occasionally Ishiwata finds a product with extra potential that he can then take beyond the Marantz standard he sets and into an even more special region. Such projects result in the genesis of a 'what if...?' model that embodies even more of his signature sound by improving sound-critical components through a process of careful selection and subtle blending, testing, listening and testing again. That's how a KI-Signature product born, much akin to the creation of fine music. As Ishiwata says, "Like any musical performance, all the players must understand and be capable of fulfilling their role. Nothing more. Nothing less."