Equipment Disc Player
Price Now $4,500.00
Was
Was
Save $0.00 (0%)
This product is not eligible for further discounts.
Questions and Answers
Availability: In Stock
This item is in stock and ready to ship. Depending on the time of day when you place your order, it will ship same day or next business day. 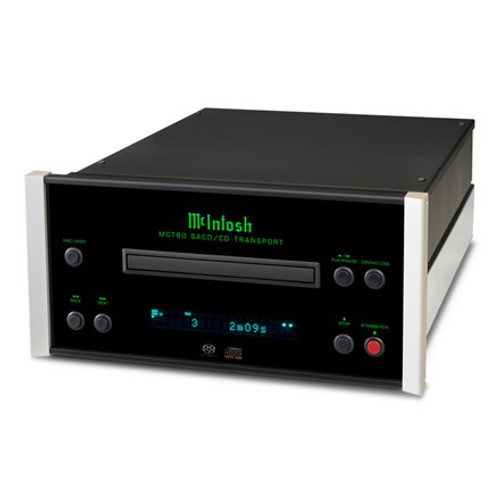 Expressly designed to match with McIntosh's compact MXA80 integrated audio system, MX150 headphone amplifier, and other smaller-sized components – and tailored for use with the McIntosh components with an MCT input due to its proprietary MCT (DIN) output that provides high-definition DSD and the purist-possible sonics – the MCT80 SACD/CD transport offers state-of-the-art performance from nearly every kind of audio disc manufactured. Coaxial, optical, and MCT outputs allow MCT80 to be paired with any product that contains digital inputs – including integrated amplifiers and preamplifiers. A twin-laser pickup with different wavelengths focused through one laser assembly, two-times reading speed, and a high-end die-cast-aluminum CD tray with extra-fast digital servo ensure optimal reading and tracking. In addition to a custom-made digital power supply and multiple regulators, MCT80 boasts a power control input connection and full-function remote control for the simplest-possible operation.

First and foremost, however, the super-quiet and hyper-accurate MCT80 produces beguiling sound. You'll both discover and rediscover all the information on your discs. Everything from the boom of a bass drum to the distinctive jangle of a Rickenbacher guitar to the brassy zest of a trombone will take on realistic proportions. You won't need to imagine what live music sounds like; you'll experience it. And you'll do it all in style, as MCT80 touts McIntosh's signature looks, including fiber-optic solid-state front-panel illumination, black glass faceplate, and stainless-steel super-mirror-finish chassis. This is how digital was always supposed to sound and feel. 100% Music Direct Guaranteed.

Handmade for Everyone Who Appreciates the Superiority of Hands-On Artistry
McIntosh's hand-crafted ethic predates by more than half a century the hand-crafted movement currently re-defining the beer, food, furniture, jewelry, and soap industries. From patrons of farm-to-table restaurants to fans of limited-batch beer, people increasingly realize the importance and superiority of hand-crafted goods in their everyday life. Whether it's the exacting detail afforded the PC boards, the meticulous attention paid to the hand-wound transformer coils, or the innovation behind patented Power Guard circuitry, McIntosh shares in the same belief. Rather than cut corners or adhere to mass-produced construction, McIntosh only puts its name on components that deliver paragon experiences by way of their unassailable artistry and precision-minded quality. While McIntosh products don't come cheap, they stand out – and stand the test of time – in a world flooded by homogeneity and inferiority.