Equipment Phono Preamps
Price Now $995.00
Was $1,599.00
Was
Save $604.00 (38%)
Questions and Answers
Availability: In Stock
This item is in stock and ready to ship. Depending on the time of day when you place your order, it will ship same day or next business day. 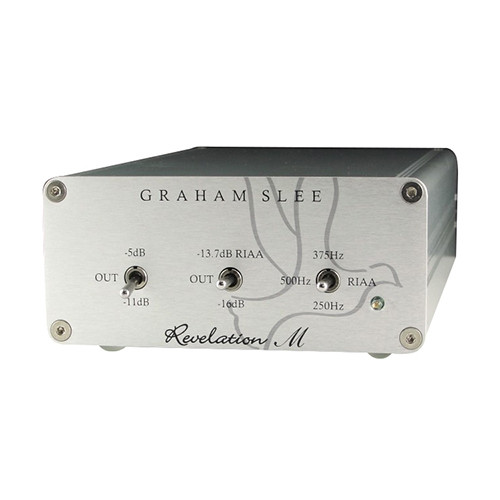 Have older vinyl records, mono LPs, and 78s? Hear them the way they're supposed to sound – as well as modern pressings – with the Graham Slee Revelation phono preamplifier. Featuring 15 equalization settings to let you dial-in the parameters of past recording EQ curves and specifications, the English-built Revelation is true to its namesake when it comes to the degree of detail, insight, and nuance it helps glean from LP grooves. Three front-panel switches allow you to select from the various combinations of turnover and rollover frequencies. And you'll always know the correct positions for Decca/London, HMV, and other record labels thanks to the included manual. A handy mono switch on the rear panel captures the sound of mono LPs with intoxicating results.

Akin to most Graham Slee analog components, Revelation boasts a very low noise floor and active equalization in which the frequency response fits the RIAA curve by way of varying the negative feedback brought to the input. The approach's benefits include consistent overload margins, organically attenuated pops/ticks, and the option to employ small capacitors with higher voltage ratings. Paralleled op-amps, frequency-tracking-matched time-constant bypass capacitors, pseudo-differential ground-sensing inputs, and high-quality audio electrolytes also separate Revelation from the competition. Read more about Graham Slee's advanced technology and topology below. And know that this revelatory phono preamplifier is backed by our 100% Satisfaction Guarantee. Simply choose the MC or MM version from our drop-down menu above.

"The Graham Slee Revelation M is a honey of a phono preamplifier that goes about its business in the most musical and musically honest way I've yet heard from a ca. $1500 model. It effortlessly serves up a captivating mix of tube-like tonality, wide bandwidth, foot-tapping timing, class-leading imaging, and reproduction of microdynamics."
– Oliver Amnuayphol, SoundStage! Access

Paralleled Op-Amps
This is a very old technique in which two (or more) op-amps are connected in parallel, either to reduce circuit noise by 3dB, or to increase the output current by a factor of two. In this case, it also increases the quiescent or no-signal standing current in the output stage to two op-amps worth. So, for more of the signal, the output is operating within a Class A envelope – especially the subtle signal information responsible for the "live" feel and accuracy of the stereo image. In other words, it is not affected by output stage cross-over distortion.

Frequency-Tracking-Matched Time-Constant Bypass Capacitors
The trouble with so many audio designs is that although great attention is paid to high-frequency stability, many engineers have little or no understanding about low-frequency stability. Looking back at some early valve circuits, the time constants between local power-supply decoupling and the pass frequencies of the stage, are matched. If they were not, the power supply for that section will gyrate in sympathy with the signal up to the point the decoupling becomes effective. Therefore, that gyration feeds back into the signal and distorts it, and in the worst case, will lead to self-oscillation. Such frequencies exist in the sub-bass, and if not time-constant matched, exhibit themselves as a muddy sound. It has also become common practice to bypass large capacitors with smaller ones because, very often, large capacitors have poor performance characteristics at mid to high frequencies. However, it would seem a mystery as to how the bypass capacitor value is chosen? Many articles simply use a rule of thumb like "all electrolytics are bypassed with 100n polyester capacitors." However, it is so easy to see using conventional engineering math, that the bypass capacitor can be chosen to start at a particular frequency from the impedance of that part of the circuit. Now, by using the argument above, the decoupling capacitor can also be bypassed such that it shares the same time constant. Without this, the circuit is "reinforced" above a particular frequency, but the power supply to that section is not, so the power supply becomes loose, enabling it to again feed back). The result without is the listener is aware of seams between particular frequency ranges. The result with frequency-tracking-matched time-constant bypass capacitors is a totally seamless performance.

Pseudo-Differential Ground Sensing Inputs
When is a ground not a ground? Answer: When it has impedance. If you take a journey from your (MM or MI) cartridge to the phonostage input by the earthy (ground) conductor, you will see on your travels: 1) the coil wire is attached by solder to the inside of the cartridge pin; 2) on the outside the cartridge pin has a rolled spring contact gripping onto it; 3) this contact is soldered to the thin arm wire which travels along the arm tube, loops out to pass the arm bearing, and then down the middle of the arm mount where it is attached by; 4) solder to the arm plug pin; 5) the arm plug pin is in contact with the arm socket and; 6] to the arm socket is soldered the screen of the arm cable; 7) at the phonostage end the screen is soldered to the body of the phono plug and; 8) the phono-plug body grips the phono socket. There are eight contact points. Three are pressure contacts and five soldered joints. All exhibit some impedance and, also, the metal of the wire/cable exhibits a very tiny impedance. A soldered joint is a joint of dissimilar metals, and so is a thermocouple. A thermocouple develops a voltage, and for a potential difference to exist, there must be resistance. The AC form of resistance is impedance. Therefore there's a voltage drop between cartridge and phonostage input that allows the voltage at the lower end of the cartridge to float above ground; there is ground current. Those who don't understand these finer points favor balanced wiring, but unless that is done to an exacting standard, it won't work. It is also very inconvenient and expensive in having this work done with only a suggestion of a promise that you just maybe get an increase in performance. And you will be stuck with a balanced input phonostage unless you revert back to conventional turntable wiring. Revelation features pseudo-differential ground-sensing inputs that require no modifications to conventional turntable wiring. What a pseudo-differential input does is float the "ground" input above ground by just more than the lumped impedance described above. A conventional grounded input does not have much of a common-mode noise rejection ratio (CMRR). A balanced input has infinite CMRR, but only provided that the wiring balance is perfect. A pseudo-differential input has CMRR = Gain, which at hum frequencies is 58.5dB (due to equalization), or nearly 1,000:1. It does not mean that you can get away with bad or corroded contacts along the ground path as that could exceed the expected lumped impedance, and hence hum would result. Also, the arm "earth" is still required as that is the only form of screening for the cartridge, and arm wires contained within. However, it does mean that the smaller artifacts of induced mains frequency in a properly conventionally wired turntable is ignored by the phonostage, meaning that the signal is no longer modulated by it and the resultant cleaned-up signal reveals far more musical information heard in the form of greatly improved timbre. Also, as one channel could exhibit a greater ground impedance to the other. That is now ignored and therefore, the stereo image is much improved. At high frequencies, there is less gain (due to equalization), but CMRR is still assisted by approximately 22dB. Therefore, although it will not cancel large radio signals that a badly screened input could pick up, any tiny radio frequencies present in a well-screened input will be ignored.

High-Quality Audio Electrolytes
Electrolytic capacitors are two layers of aluminum foil rolled up with an oil-soaked paper between them as dielectric, with an oxide film anodized onto the foil as polarized insulator. You may have observed the behavior of the acid electrolyte in a car battery. The behavior inside an electrolytic capacitor is similar but on a vastly smaller scale. There is movement inside the dielectric due to the flow of AC current (the signal). The paper/oil composition within an audio electrolytic is formulated so that these movements do not introduce distortions of their own, whereas with a general-purpose electrolytic, the behavior is not predictable. Generally, bass frequencies are more prone to distortion because of the greater energy mass contained in them. As a phonostage has 10 times more gain (due to equalization) at bass frequencies, it is particularly important to place the emphasis on accuracy here.

Fast-Pulse Polypropylene Capacitors
Polypropylene is a very inert plastic. It prevents almost anything sticking to it. Hence, the dielectric film cannot make intimate contact with the foil and therefore, there is less dielectric absorption to slow the propagation of an AC signal through them. The latest generation of polypropylene film capacitors are made to be very fast – the equivalent in amplifier terms of 1,000 volts per microsecond! However, they are not available in the values to suit the impedance of most modern phonostage equalization networks. Revelation uses Graham Slee's high-impedance EQ network especially developed to exploit this property.