Equipment Speakers
Price Now $639.00
Was $999.00
Was
Save $360.00 (36%)
Questions and Answers
Condition: Open Box
Availability: In Stock
This item is in stock and ready to ship. Depending on the time of day when you place your order, it will ship same day or next business day. 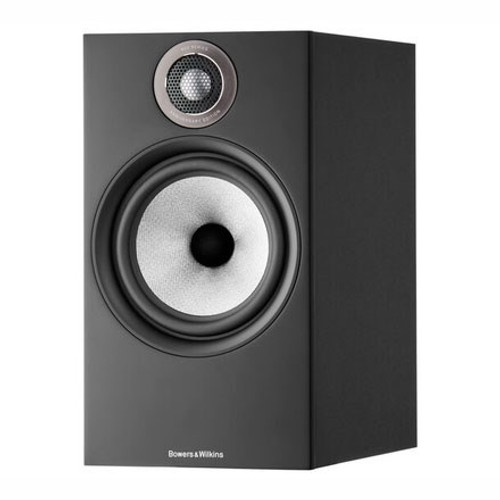 Be alerted when Bowers And Wilkins - 606 S2 Anniversary Edition Bookshelf Speakers (Black, Pair) **OPEN BOX** is back in stock

In the case of the Bowers & Wilkins Anniversary Series 606 S2 bookshelf loudspeaker, it's okay to judge a book by its cover, which proudly showcases a remarkably elegant trim ring around the tweeter. This 13.5 x 7.5 x 12.8-inch (HWD) dynamo provides clear, pure sound as a clean as its classy, looks-good-anywhere aesthetics. But don't let its deceptively polite appearance fool you. Each 15.2-pound unit plays with a fullness, punch, snappiness, and attack that will have you sit up, take notice, and put down your phone. Revealing and yes, belying its compact size, powerful, it showcases the fundamental appeal and lively details of any style of music – be it the tonal beauty of a chamber orchestra, intensity of a speed-metal burner, rhythmic complexity of a bebop classic, or acoustic signature of a country ballad.

Beginning with optimized crossovers with enhanced Mundorf capacitors, the unique, flagship-derived characteristics of the ultra-dynamic 606 S2 continue with its 6.5-inch Continuum cone bass/midrange driver – a trademarked innovation that took eight years to develop and first found in Bowers & Wilkins' much costlier 800 Series. It works in complete harmony with a refined, one-inch Decoupled Double Dome tweeter (with 38Hz breakup) to provide degrees of purity, smoothness, and accuracy. An exemplar of precision, 606 S2 probes and identifies the layers embedded in songs and albums, and renders film soundtracks with an immersive aptitude that nonetheless avoids being sterile or clinical.

It's also quite a looker. A white, oak, or black matte finish complements aesthetics free of grille pegs and sleek cosmetics that hide the rear-firing, dimpled, flared Flowport by locating it in the back of the cabinet. Speaking of its bass-reflex enclosure, each 606 S2 includes a two-piece foam plug that can be inserted (or left out) for further bass tweaking. And worry not: 606 S2 generates size-defying bass that remains taut, controlled, and round. Removable magnetic grilles, self-adhesive rubber feet, and the option to pair 606 S2 with custom Bowers & Wilkins STAV S2 stands (sold separately) add to the versatility.

Voice-matched to all other 600 Series models, 606 S2 also proves a beast when employed in a multichannel setup. It excels at both low and high levels, while its vented-box architecture means you'll also enjoy satisfying low-end frequencies that help bring involving energy to music and movies. Factor in a five-year manufacturer warranty and our 100% Music Direct Satisfaction Guarantee, and it's high time you spent some quality evenings driving the 606 S2.

"Along with the improved muscle, we're finding it easier to track low-level instrumental strands and pick up on fine detail. The new model conveys instrumental textures with more skill and locates instruments within the sound stage with greater stability."
—What Hi-Fi?, 2020 Best Standmount Speaker €400-750 Award