Equipment Speakers
Price Now $575.00
Was $899.00
Was
Save $324.00 (36%)
Questions and Answers
Condition: Open Box
Availability: In Stock
This item is in stock and ready to ship. Depending on the time of day when you place your order, it will ship same day or next business day. 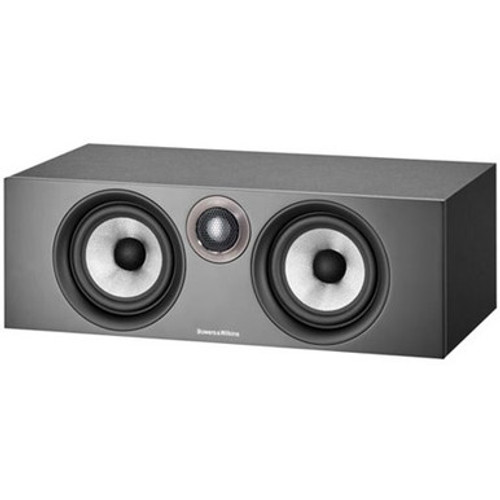 Continuum cone technology and an optimized crossover enhanced with Mundorf capacitors: That's all that really needs to be said to understand why the Bowers & Wilkins Anniversary Series HTM6 S2 center-channel loudspeaker plays with a level of clarity, purity, and punch that will help transform any three-channel or surround system into a space that treats music and movies with deep reverence. Developed over an eight-year period and first found on the company's flagship 800 Series Diamond line, the two five-inch Continuum drivers found in HTM6 S2 perform with enticing smoothness, accuracy, and precision. The tandem works in concert with a refined version of a one-inch Decoupled Double Dome tweeter, which offers 38kHz breakup, multi-layered detail, and involving dynamics on demand. With HTM6 S2, any debates about going out or staying in will get much easier.

Measuring only 6.3 x 18.9 x 10 inches (HWD), HTM6 S2 takes up little space and fits almost anywhere. And with its minimalist looks and classy anniversary-themed trim ring around the tweeter, the 17.2-pound design also aces aesthetics. A white, oak, or black matte finish complements panels free of grille pegs and sleek architecture that hides the rear-firing, dimpled, flared Flowport by locating it in the back of the cabinet. Tailored to match the sound of the Bowers & Wilkins 603 S2 towers and 606 S2 bookshelf models, HTM6 S2 brings iconic Bowers & Wilkins sonics and build to your room for a price that won't cause you to look twice. As always, your satisfaction is backed by our 100% Music Direct Guarantee.