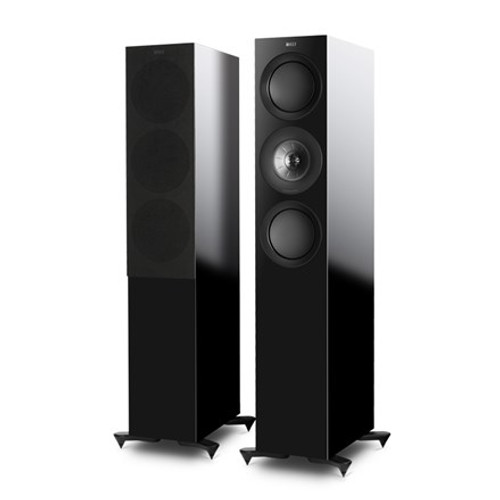 The KEF R7 tower loudspeaker recognizes the needs (and wants) of music and movie lovers who crave the robust performance only floorstanders can deliver, but who also have practical limitations when it comes to space and size. Differing from the series flagship only in that it harbors two fewer woofers and stands a bit shorter, the 43.7 x 12.2 x 15.1-inch (HWD) R7 occupies an aesthetically pleasing footprint while simultaneously playing with involving finesse, smoothness, detail, clarity, and resolution. Whether employed in a two-channel or home-theater arrangement, K7 proves unfailingly entertaining – and looks exquisite while doing so. Chalk it up to five major innovations, mostly drawn from KEF's Reference Series, involved with K7's perfectionist-minded build.

Now in its 12th generation, the renowned KEF Uni-Q driver – bundling a one-inch vented aluminum-dome tweeter with a five-inch aluminum-cone midrange – boasts a redesigned midrange motor system that arrives courtesy of KEF's in-house simulation and analysis tools. Featuring a shaped and undercut pole as well as symmetrical aluminum demodulation rings that combine to significantly reduce the inductance in the lower midrange, the Uni-Q assembly both lessens distortion and enhances imaging.

On similarly active duty, R7's Shadow Flare – a savvy method of diminishing cabinet diffraction – visually functions a trim ring while functionally serving as a surface that extends the Uni-Q waveguide effect. In R7, the tweeter no longer has line of sight of the cabinet edges, thus creating a shadow region at the points where the potential for diffraction remains highest, minimizing the acoustic impact to negligible levels. In sum, the Shadow Flare greatly assists the reproduction of subtle cues and nuances in your favorite recordings.

Want bass? Of course you do! R7 transmits deep, taut, punchy, and soulful low frequencies by way of a pair of dedicated, 6.5-inch drivers with a redesigned magnet system. Each is built using a two-part structure, whereby a shallow concave aluminum skin sits atop a paper cone. The stiffness – combined with the cone's unique geometry – reduces additional resonances and delivers the pistonic movement that account for superb timing. Credit also goes to R7's flexible ports. Molded via computational fluid dynamics, the flare and profile of each port is calculated to delay the onset of turbulence all the while the walls prevent longitudinal resonances from coloring the midrange.

While R7's cabinets looks mighty pretty, they abide by acoustic principles that put the spotlight on sonics. Constrained Layer Damping bracing (in which the internal braces are joined to the panels by a lossy interface) helps dissipate unwanted vibrations. In addition, a revised bracing layout furthers the creation of an inert platform that allows the drivers to operate at an optimal level. Color tone-matched aesthetics, optional microfiber magnetic grilles, and supplied spikes round out a 69.2-pound speaker ready for whatever you throw at it. 100% Music Direct Satisfaction Guaranteed.