Equipment Speakers
Price Now $599.00
Was $899.99
Was
Save $300.99 (33%)
Questions and Answers
Condition: Open Box
Availability: In Stock
This item is in stock and ready to ship. Depending on the time of day when you place your order, it will ship same day or next business day. 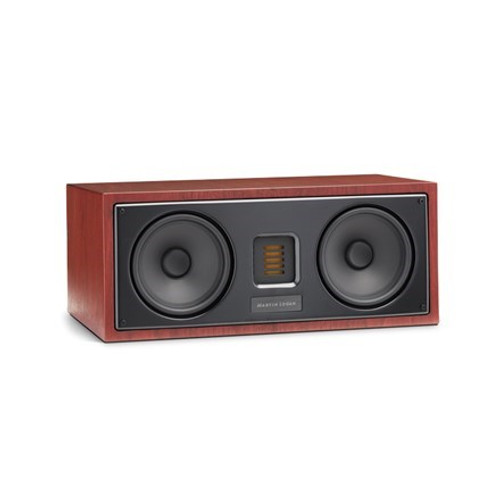 Exceptional home-theater sound is impossible when all the action and dialogue at center stage gets lost in the mix. If you've ever had to replay a scene to decipher what the actors were saying or noticed all you're hearing is sound effects, it's time to step up to the kind of audiophile quality offered by MartinLogan's Motion 30i center-channel speaker. Equipped with new enclosures with reinforced baffles that virtually eliminate cabinet resonances as well as the company's highly regarded Folded Motion tweeter, it delivers incredibly smooth, low-distortion high frequencies with crystal clarity and wide dispersion that make you feel like you're an actual participant in the movie scene. And it doesn't skimp on lower frequencies either. Two 5.5-inch-high excursion woofers work in concert with two low-turbulence, rear-firing bass ports to supply all the chest-thumping impact of a bomb exploding or a starship leaping into hyperspace.

Armed with an impressive 91dB sensitivity rating, Motion 30i proves far more versatile than average center-channel speakers that can be difficult to match with a wide variety of amplifiers. Whether you're using a simple 35wpc receiver or a high-end 200-watt separate, Motion 30i produces naturally balanced tones and thrilling dynamics. Such performance comes courtesy of trickle-down technology from MartinLogan's critically acclaimed flagship speakers. Features include special internal components that incorporate a custom air-core coil and low DCR steel laminate inductors as well as polyester film capacitors in series and low DF electrolytic capacitors in parallel.

Visually, Motion 30i's low-resonance, solid-wood cabinetry and subtly sloped design deem it a speaker ready for the spotlight in your entertainment space. And while its physical footprint only measures 6.9 x 16.5 x 10.5 inches (HWD), you'll love its stunning realism. Five-way, bi-wire tool-less binding posts, MartinLogan's five-year warranty, and our 100% Satisfaction Guarantee give you even more reasons to take the risk-free plunge.

"As I found with the 20is, the inclusion of an AMT tweeter, with a smooth and tonally rich sound signature overall, makes the 30i an excellent choice for center channel duties. Dialogue was consistently clean, intelligible, and had no issues over-emphasizing sibilance, even with the volume up high."
—Dylan Seeger, Home Theater Review, four-star review

What makes Motion Series sound so amazing? MartinLogan's dedicated in-house engineering and design team started by utilizing and refining the most advanced, compact technologies and combining them with innovative engineering and time-honored cabinet construction techniques. The result is an emotionally engaging sound that rivals (and most times trounces) traditional loudspeakers of similar size and price.

MartinLogan's signature Folded Motion tweeter utilizes an extremely low mass diaphragm that "squeezes" air, thus demanding significantly less excursion than the typical one-inch dome tweeter. Its folded design allows for a much larger surface area (compared to that of a regular one-inch dome tweeter), controlled dispersion characteristics, and vanishingly low distortion. It's a miracle of audio engineering that's able to deliver much of the high-frequency detail and speed of a large, dynamic electrostatic panel in a small space.

Custom built, low-distortion drivers pair high-power magnet structures with aluminum cone diaphragms to deliver massive excursion and sound output, preserve minute bass details, and maximize power handling capability, all without a hint of distortion. A unique concave dust cap design reinforces the strength and rigidity of the cone while reducing break up modes. The use of aluminum for cones maximizes rigidity and strength of the drivers without adding excessive weight. This, along with the exceptional damping properties of aluminum, ensures the smooth, non-resonant response necessary for seamless blending with high-resolution Folded Motion tweeters. An added benefit of aluminum is its outstanding thermal conduction capability which allows cones to serve as efficient heat sinks for voice coils. To deliver accuracy in the critical midrange, mid-frequency drivers feature a specially engineered "stiff" suspension. Stiffening the suspension (the spider and surround) raises the driver's resonant frequency and optimizes its performance to achieve a natural roll-off and inherently operate within an ideal range for a mid-frequency reproduction (as opposed to a comparably sized woofer).

Premium Motion Series speakers feature proprietary Vojtko crossover networks using polypropylene and low-DF electrolytic capacitors, custom-wound inductors, and thermal and current protection. Vojtko crossovers are named after MartinLogan's chief audio technologist, Joe Vojtko. His unique approach to crossover design is as big of a part of the "MartinLogan Sound" as are electrostatic and Folded Motion thin-film driver technologies. A Vojtko crossover isn't so much a set of design requirements as it is a philosophy. Vojtko crossovers are designed in such a way that all drivers are kept within their optimal frequency range and balanced with one another. The drivers themselves are as much a part of a Vojtko crossover as are capacitors and resistors. Before the design of any crossover begins, drivers are carefully selected or designed to operate within a very intentional frequency range and with precise and predictable performance parameters. Vojtko crossovers are always built from high-quality parts, and care is taken to avoid overly complex topologies – a straightforward objective due to the careful selection of woofers and tweeters. The final (and most critical) aspect of a Vojtko crossover is that final voicing is conducted in a space that is indicative of a real-world environment. This pragmatic approach allows MartinLogan speakers to sound their best in real-world rooms.