Equipment Speakers
Price Now $899.00
Was $1,499.98
Was
Save $600.98 (40%)
This product is not eligible for further discounts.
Questions and Answers
Condition: Open Box
Availability: In Stock
This item is in stock and ready to ship. Depending on the time of day when you place your order, it will ship same day or next business day. 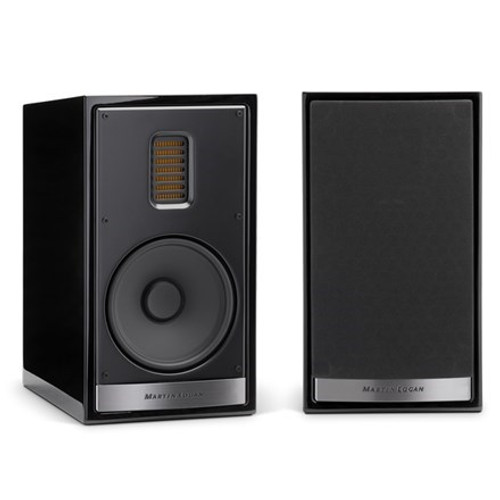 MartinLogan's Motion 35XTi bookshelf loudspeakers prove big, engaging sound can come from a small package. The beguiling performance first stems from the proprietary Folded Motion XT tweeter that boasts a 40 percent larger radiating surface than other any other MartinLogan Motion speaker. The resulting wide dispersion produces a stunningly immersive soundstage that extends far beyond the speaker's boundaries and operates free of the room reflections that typically impact performance. Additionally, the XT tweeter gets rave reviews for its smooth, distortion-free presentation of high-frequency detail. Combine such sweetness with the robust, muscular midrange and low frequencies supplied by the extremely rigid, 6.5-inch aluminum cone woofer as well as virtually resonance-free cabinetry (courtesy of updated reinforced baffles), and you have a compact monitor that keeps you focused on what matters most – the emotional and visceral impact of your music and movies.

Visually, luxurious, high-gloss finishes and satin-smooth edges add to the appeal. And while Motion 35XTi only stands 13.5 inches high and claims a 7.6 x 11.8-inch (WD) footprint, guests will be surprised by its ability to render instruments and effects with attention-getting realism. Five-way, bi-wire binding posts allow for easy installation. Indeed, if you've been thinking that tight space and a limited budget would prevent you from experiencing world-class sound, it's time to try out Motion 35XTi – backed by our risk-free 100% Satisfaction Guarantee.

"There are a million different ways speakers can voice music, but it's those presentations that keep me sitting and listening that really matter. The 35XTi really hits it out of the park in this regard."
– Drew Kalbach, The Absolute Sound

MartinLogan's signature Folded Motion tweeter utilizes an extremely low mass diaphragm that "squeezes" air, thus demanding significantly less excursion than the typical one-inch dome tweeter. Its folded design allows for a much larger surface area (compared to that of a regular one-inch dome tweeter), controlled dispersion characteristics, and vanishingly low distortion. It's a miracle of audio engineering that's able to deliver much of the high-frequency detail and speed of a large, dynamic electrostatic panel in a small space. Folded Motion XT tweeters, advanced thin-film transducer technology even further, with a 40% larger radiating surface and 80x30-degree controlled dispersion. This tweak increases audible bandwidth without sacrificing details and minimizes distortion to an unprecedented level while increasing efficiency and the tweeter's already lightning-fast response time.

Premium Motion Series speakers feature proprietary Vojtko crossover networks using polypropylene and low-DF electrolytic capacitors, custom-wound inductors, and thermal and current protection. Vojtko crossovers are named after MartinLogan's chief audio technologist, Joe Vojtko. His unique approach to crossover design is as big of a part of the "MartinLogan Sound" as are electrostatic and Folded Motion thin-film driver technologies. A Vojtko crossover isn't so much a set of design requirements as it is a philosophy. Vojtko crossovers are designed in such a way that all drivers are kept within their optimal frequency range and balanced with one another. The drivers themselves are as much a part of a Vojtko crossover as are capacitors and resistors. Before the design of any crossover begins, drivers are carefully selected or designed to operate within a very intentional frequency range and with precise and predictable performance parameters. Vojtko crossovers are always built from high-quality parts, and care is taken to avoid overly complex topologies – a straightforward objective due to the careful selection of woofers and tweeters. The final (and most critical) aspect of a Vojtko crossover is that final voicing is conducted in a space that is indicative of a real-world environment. This pragmatic approach allows MartinLogan speakers to sound their best in real-world rooms.

Premium gold-plated five-way tool-less binding posts assure a stable connection while accommodating a wide range of connections. Two sets of binding posts accommodate bi-wire connections to increase signal carrying conductors and allow each portion of the crossover to be directly coupled to the amplifier.