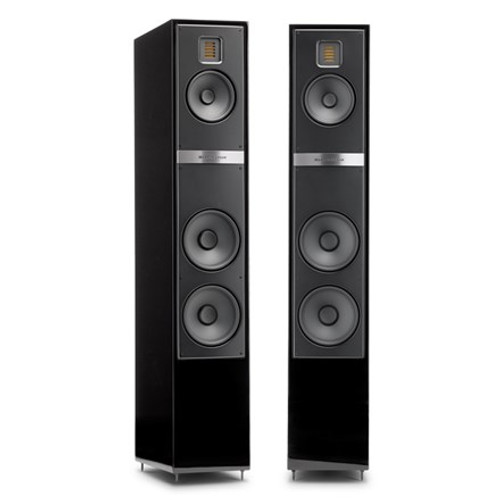 There are plenty of sub-$2,500 loudspeakers out there, but few match the lush, seductive properties of MartinLogan's Motion 40i tower speaker. From front to back, all the way to its new enclosures with reinforced baffles that virtually eliminate cabinet resonances, it proves MartinLogan's four-decade-plus dedication to innovation won't quit. Able to move more rapidly and effectively than a typical dome or cone type all the while avoiding room-reflection artifacts, its proprietary Folded Motion tweeter comes on as a sweet, smooth transducer that delivers massive amounts of high-frequency detail without the harsh, mechanical artifacts that plague many traditional domed designs. The tweeter's low-mass diaphragm and large surface area enable Motion 40i to produce the kind of wide dispersion and pinpoint accuracy that turn recordings and movie scenes into addictively realistic performances.

In addition, Motion 40i ably addresses the midrange with a 5.5-inch aluminum-cone driver positioned in a non-resonant asymmetrical chamber and housed in a cast polymer basket. Two identically designed 6.5-inch woofers handle the lowest frequencies. Rigidly structured dust caps found in all the woofers drastically reduce the cone breakup heard in lesser designs. Further distinctive from many speakers in its crowded price bracket, Motion 40i doesn't require careful amplifier matching to generate sweeping dynamics and chest-thumping bass response. With a 92dB efficiency rating, it provides audiophile sound whether you're using a 20-watt tube amplifier or a 300-watt solid-state model. And yet another reason for Motion 40i's natural and effortless presentation: The precision Vojtko filter found inside. Its custom air-core coil, low DCR steel laminate inductors, polyester film capacitors arranged in series, and low DF electrolytic capacitors situated in parallel are the same as those found in MartinLogan's far more expensive flagship model.

A luxurious, high-gloss finish speaks to Motion 40i's visual appeal – one that deserves to take center stage in your entertainment area. With a 42.5 x 7.6 x 12.8-inch (HWD) footprint, it serves as a tower that moves plenty of air but remains compact enough to fit in space-challenged environments. Equipped with five-way, bi-wire, tool-less binding posts and removable spikes, it can be set up in a matter of minutes. MartinLogan's rock-solid five-year warranty and our 100% Satisfaction Guarantee seal the deal.

"The updated Motion 40i system truly is a spectacular package. It blows away my current setup in terms of cohesion and clarity without sounding clinical and sacrificing the fun. And at the end of the day, a fun system is what you want when you're at the movies. I found myself simply watching, enjoying, and not picking apart what I thought I was hearing."
– Taps Das, Secrets of Home Theater and High Fidelity

What makes Motion Series sound so amazing? MartinLogan's dedicated in-house engineering and design team started by utilizing and refining the most advanced, compact technologies and combining them with innovative engineering and time-honored cabinet construction techniques. The result is an emotionally engaging sound that rivals traditional loudspeakers of similar size and price. Our 'no compromise' philosophy gives Motion Series a unique sound you won't find anywhere else.

MartinLogan's signature Folded Motion tweeter utilizes an extremely low mass diaphragm that squeezes air, thus demanding significantly less excursion than the typical one-inch dome tweeter. Its folded design allows for a much larger surface area (compared to that of a regular one-inch dome tweeter), controlled dispersion characteristics, and vanishingly low distortion. It's a miracle of audio engineering that's able to deliver much of the high-frequency detail and speed of a large, dynamic electrostatic panel in a small space.

Custom built, low-distortion drivers pair high-power magnet structures with aluminum cone diaphragms to deliver massive excursion and sound output, preserve minute bass details, and maximize power handling capability, all without a hint of distortion. A unique concave dust cap design reinforces the strength and rigidity of the cone while reducing break up modes. The use of aluminum for cones maximizes rigidity and strength of the drivers without adding excessive weight. This, along with the exceptional damping properties of aluminum, ensures the smooth, non-resonant response necessary for seamless blending with high-resolution Folded Motion tweeters. An added benefit of aluminum is its outstanding thermal conduction capability which allows cones to serve as efficient heat sinks for voice coils. To deliver accuracy in the critical midrange, mid-frequency drivers feature a specially engineered stiff suspension. Stiffening the suspension (the spider and surround) raises the driver's resonant frequency and optimizes its performance to achieve a natural roll-off and inherently operate within an ideal range for a mid-frequency reproduction (as opposed to a comparably sized woofer).

Floorstanding Motion models utilize 2.5-way designs that feature woofers positioned low in the cabinet and close to the floor. This deliberate design addresses a phenomenon known as floor bounce where sound reflected off the floor (from drivers positioned high on a cabinet), and those aimed directly at the listener interfere with each other. Without addressing these issues, listeners would experience bloated bass and massive increases and decreases in sound levels throughout critical midrange frequencies. Through careful crossover design and driver positioning, floorstanding Motion speakers deliver a flat, balanced response through the bass and midrange regions. Such considerations are crucial when seeking to achieve accurate reproduction of vocals and instruments such as kick drums.

Premium Motion Series speakers feature proprietary Vojtko crossover networks using polypropylene and low-DF electrolytic capacitors, custom-wound inductors, and thermal and current protection. Vojtko crossovers are named after MartinLogan's chief audio technologist, Joe Vojtko. His unique approach to crossover design is as big of a part of the MartinLogan Sound as are electrostatic and Folded Motion thin-film driver technologies. A Vojtko crossover isn't so much a set of design requirements as it is a philosophy. Vojtko crossovers are designed in such a way that all drivers are kept within their optimal frequency range and balanced with one another. The drivers themselves are as much a part of a Vojtko crossover as are capacitors and resistors. Before the design of any crossover begins, drivers are carefully selected or designed to operate within a very intentional frequency range and with precise and predictable performance parameters. Vojtko crossovers are always built from high-quality parts, and care is taken to avoid overly complex topologies – a straightforward objective due to the careful selection of woofers and tweeters. The final (and most critical) aspect of a Vojtko crossover is that final voicing is conducted in a space that is indicative of a real-world environment. This pragmatic approach allows MartinLogan speakers to sound their best in real-world rooms.

Premium gold-plated five-way tool-less binding posts assure a stable connection while accommodating a wide range of connections. Two sets of binding posts accommodate bi-wire connections to increase signal carrying conductors and allow each portion of the crossover to be directly coupled to the amplifier.