Equipment Speakers
Price Now $349.00
Was $499.98
Was
Save $150.98 (30%)
Questions and Answers
Availability: In Stock
This item is in stock and ready to ship. Depending on the time of day when you place your order, it will ship same day or next business day. 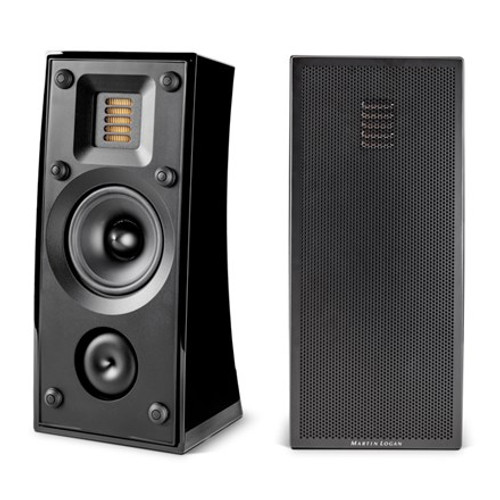 MartinLogan's flagship electrostatic speakers are considered by many audiophiles to represent the gold standard for audio transparency and speed. In Motion 4i, the company's award-winning engineers capture that signature sound in a bookshelf loudspeaker small enough to fit on a desktop or be mounted on a wall of a theater setup. A 12.5-inch tall, incredibly compact transducer with enough magic to command the attention of the even jaded listeners, it comes equipped with the same type of custom air-core coil, low DCR steel laminate inductors, and low DF electrolytic capacitors found in MartinLogan's flagship models. No wonder its rendering of subtle high-frequency detail and ability to deliver a foot-tapping midrange make it competitive with speakers costing several times its asking price.

Faced with the daunting task of creating a compact speaker with low-end bass reproduction found in much larger speakers, MartinLogan's team invented the Motion 4i's Cascading Bass Reflex Port. The innovative solution allows a long tuned port to be fit into a very limited space by means of an ingeniously simple cascading fold design. The result: Immersive low bass that can play at high volumes with very low distortion.

Another reason Motion 4i sounds so natural and well-balanced owes to how effortlessly the Folded Motion ribbon tweeter integrates with the four-inch paper cone driver. Housed in a non-resonant, asymmetric chamber, the driver, with its extremely rigid dust cap, drastically reduces cone break-up modes heard in lesser designs. And with an impressive 90dB efficiency rating, Motion 4i proves fully compatible with 4-ohm and 8-ohm amplifiers rated between 50Wpc and 150wpc. So, whether you're system is driven by audiophile-grade tubes or a beefy solid-state home-theater rig or something in between, Motion 4i will not have a problem keeping pace.

Visually, the meticulously polished high-gloss finish and strikingly modern curved appearance deem it a bookshelf model you'll be proud to display in your living room, office, or as part of a surround system. When you consider Motion 4i includes MartinLogan's five-year warranty and Music Direct's 100% Satisfaction Guarantee, the decision to obtain a pair for a risk-free in-home audition becomes obvious.

"[If] you're looking for something different, and an involving listening experience, I highly recommend that you give the MartinLogan Motion 4i an audition."
—Vince Hanada, Soundstage! Access

"The MartinLogan Motion 4i speakers did extremely well in the context of their diminutive size... They provide a stable stereo image, lovely smooth high frequencies from their Folded Motion design tweeter..."
—Mel Martin, Secrets of Home Theater and High Fidelity