Equipment Speakers
Price Now $199.00
Was $349.00
Was
Save $150.00 (43%)
Questions and Answers
Condition: Open Box
Availability: In Stock
This item is in stock and ready to ship. Depending on the time of day when you place your order, it will ship same day or next business day. 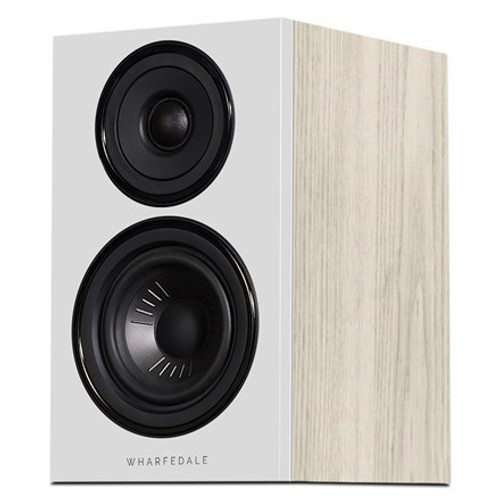 Be alerted when Wharfedale - Diamond 12.0 Bookshelf Speakers (Light Oak, Pair) **OPEN BOX** is back in stock

Wharfedale's Diamond 12.0 bookshelf loudspeaker cuts to the heart of music with a degree of precision, clarity, and magnitude unimaginable at its price point even two years ago. Akin to all of its Diamond 12 Series counterparts, the most compact model in the range is completely redesigned from the ground up to set new performance benchmarks in its class. Offering generous freedom of placement, the two-way bass-reflex speaker mines prized detail, tonality, texture, depth, and spaciousness from your recordings with thrilling insight and engaging energy.

The hit parade begins with a four-inch bass driver comprised of trademarked Klarity cone material – formulated from a blend of polypropylene and mica to add stiffness while remaining lightweight for low coloration and fast responsiveness. Fitted with a low-damping surround and shaped to achieve a flat response curve, it also produces expressive dynamics even on complex material. Relatedly, Diamond 12.0 also touts a precision-crafted magnet system with an aluminum compensation ring to minimize the effect of variations in inductance as the voice coil travels, ultimately leading to an absence of distortion and intermodulation generated by the motor system. A voice coil wound on an epoxy/glass-fiber bobbin produces higher power handling than those assembled on aluminum machines – and claims a stiffness lacking on Kapton types normally found in this cost bracket.

When it comes to the one-inch soft-dome tweeter, Diamond 12.0 shines. Comprised of woven polyester film with a high-loss coating for open, smoothly extended high frequencies, it boasts an optimized magnet system and flat front plate to attain wide dispersion and uncompressed playback. Architecturally, a very short duct on the front plate balances the acoustic load and serves to improve SPL measurement. Not to be overlooked, Diamond 12.0 utilizes a crossover network with LKR 24dB topology and air-core inductors – the latter commonly found in much more expensive high-end designs due to their low-distortion properties.

Visually, Diamond 12.0 sparkles. Not only does this compact design look gorgeous, it possesses form-follows-function architecture in which Intelligent Spot Bracing connects opposite walls with a custom, computer-modeled wood brace to reduce resonance – and not transfer it from side to another. In addition, the rear-ported enclosure works in harmony with the drive unit to produce the sound you deserve to hear.

New Klarity cone material for the drivers, formulated from a blend of polypropylene and mica, adds stiffness to reduce flexing, enabling a lightweight cone with high rigidity, low coloration, and fast response. The Klarity cone is fitted with a low-damping surround, thereby achieving both low coloration and expressive dynamics. By simulating many different cone shapes and adding ribs to provide further stiffening, a flat response curve was achieved without resorting to a high-damping surround, thereby striking an ideal balance.