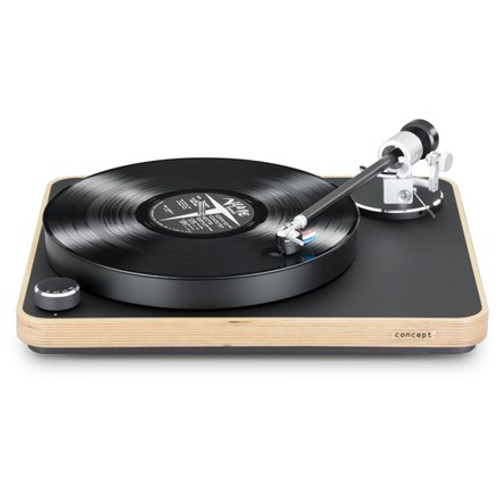 Be alerted when Clearaudio - Concept Wood Turntable is back in stock

Composure, pace, poise: Clearaudio Concept Wood turntable takes the award-winning Concept to a higher level via constrained-layer plinth comprised of Baltic birch that yields additional refinement, richness, and smoothness to musical presentations. The German-made 'table also warrants mention for its Satisfy Black tonearm and 30mm-thick platter, a combination responsible for optimum imaging and stability. An electronic speed control even gives Concept Wood the ability to play at 33, 45, and 78RPM speeds. Now, no record is off-limits, and each one will sound great!

Clearaudio Concept Wood turntable furthers the sonic excellence of the company's award-winning Concept turntable. Concept Wood uses a baltic birch, constrained layer plinth that is both visually attractive and sonically rich and smooth. The aluminum machined sub-platter and rear-mounted fine speed adjustments are an upgrade from the original Concept. This 'table is also equipped with the Satisfy Black tonearm, featuring a 3-point mechanical bearing, magnetic anti-skate, and hard-wired tonearm cable.

High-Tech Engineering, Three-Speed Capability at Turn of a Dial

Concept Wood is belt-driven by a low-noise, decoupled DC motor built into the baltic birch plinth. The platter is made of 30mm-thick polymer (POM), an engineering thermoplastic with a weighted rim for increased fly-wheel effect, providing greater speed stability. Concept Wood plays at three speeds (33RPM, 45RPM, and 78RPM) electable by an Electronic Speed Control knob.