Equipment Turntables
Price Now $1,699.99
Was
Was
Save $0.00 (0%)
Questions and Answers
Availability: In Stock
This item is in stock and ready to ship. Depending on the time of day when you place your order, it will ship same day or next business day. 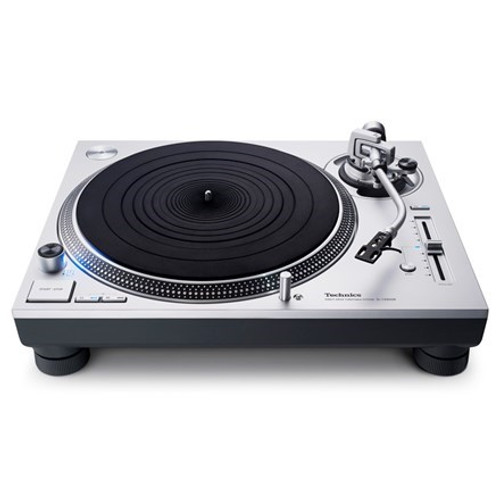 Five decades ago, Technics produced the world's first direct-drive turntable for consumers and revolutionized at-home analog playback by way of the device's ultra-stable rotation, near-utter removal of signal-to-noise degradation, vibration-killing build, and unerring reliability. Equipped with a single-rotor, surface-facing, coreless direct-drive motor that eliminates cogging and a 5.51-pound two-layer die-cast aluminum platter with underlying rubber surface and strengthening ribs, the SL-1200GR upholds that standard at an even higher level for modern users.

Inheriting parts and engineering from its reference SL-1200G sibling, the Grand Class SL-1200GR adopts precision-based, hand-tuned electronic speed control with motor-control technology cultivated in the development of Blu-ray components. Sine waves stored in ROM are used for the control waveforms at constant speed, achieving smoother and more stable rotation compared to simple sine-wave generation with an external coil. Plus, this amazing turntable offers a lightning-quick start-up time of 0.7 seconds.

Supremely rigid and accurate, the 25.3-pound SL-1200GR boasts a chassis formed by two-layer construction comprised of BMC and die-cast aluminum. Silicon rubber insulators and microcell-polymer cylindrical tubes function both as supports and vibration-control devices. Moreover, the installation section of the insulators arrive with a vertical adjustment mechanism using screws. Such architecture cancels the rattle that occurs when the turntable rests in a rack or the like, and prevents unwanted vibration. In addition, exact horizontal adjustment of the platter and record surface reduces rotation irregularity due to slanting, thereby enabling further stability.

All you really need to decide is if you want silver (SL-1200GR) or black (SL-1210GR). Our 100% Music Direct Satisfaction Guarantee has your back with either selection.

"The platter doesn't wobble about on a bouncy suspension, and it can start and stop in an instant. The arm handles beautifully and the cueing lever drops the stylus exactly where you expect it to fall. And the motor has plenty of torque if you want to dust off your record with one of those carbon-fiber brushes. I found myself simply playing and enjoying the music on my records, without much of the analog ritual often needed with more exotic equipment."
—Michael Trei, Sound & Vision

"[The] Technics SL-1200 is a genuine icon, and the updated Technics SL-1200GR looks, as you would expect, a great deal like it.... It serves up huge bass, tight control over the mids and trebles and ... an overwhelming feeling of excitement."
—Duncan Bell, T3, Platinum Award, five-star review

"Another highlight of the year is definitely the Technics SL-1200GR direct-drive turntable.... I love this turntable.... It's one of those really pleasant surprises.... I get in a lot of product to review, and a lot of it is what I think it's going to be, but sometimes they rise above. They absolutely do."
—Steve Guttenburg, The Audiophiliac (YouTube), Highlights of 2021