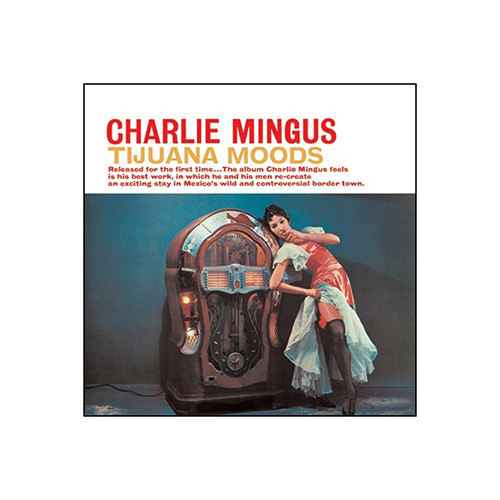 Customers Also Viewed
Description
Charles Mingus Tijuana Moods on Hybrid SACD from ORG
Mastered from the Original Master Tapes by Bernie Grundman
Also Available on Numbered 180g 45rpm 2LP
Originally recorded in 1957 but not released until 1962, Charles Mingus' masterpiece Tijuana Moods is a boisterous, swinging suite of songs that meld bebop with the tequila haze of nightclubs, a flamenco striptease, serenading mariachis and the glare of the Mexican sun in the hedonist milieu of the border town.
Tijuana Moods also happens to feature one of Mingus' greatest groups with Curtis Porter aka Shafi Hadi on alto sax, Clarence Shaw on trumpet, Jimmy Knepper on trombone and Bill Triglia on piano. Reminiscent of Mingus' late '50s style, the tight solos and incredible rhythms absolutely dominate the extended tracks and it's no surprise that Mingus himself considered it the best recording he ever made with some of the greatest musicians he ever worked with.
Mingus explains: "All the music in this album was written during a very blue period in my life. I was minus a wife, and in flight to forget her with an expected dream in Tijuana. But not even Tijuana could satisfy - despite the bullfight, jai alai, anything that you could imagine in a wild, wide-open town. After finding myself with the sting of tequila, salt and lime in my mouth and burning my nostrils, I decided to benefit musically from this experience and set out to compose and re-create what I felt and saw around me. It included a striptease in one of the many local night clubs that are the principal Tijuana industry - "cash in hand from yankee man."
One of the most important figures in twentieth century American music, Charles Mingus was a virtuoso bass player, accomplished pianist, bandleader and composer. Mingus settled in New York where he played and recorded with the leading musicians of the 1950’s – Charlie Parker, Miles Davis, Bud Powell, Art Tatum and Duke Ellington himself. One of the few bassists to do so, Mingus quickly developed as a leader of musicians. He was also an accomplished pianist who could have made a career on that instrument as well.
Mingus soon found himself at the forefront of the avant-garde. His recordings bear witness to the extraordinarily creative body of work that followed. Tijuana Moods is certainly one of those touchstone recordings!
Musicians:
Charles Mingus (bass)
Jimmy Knepper (trombone)
Curtis Porter aka Shafi Hadi (alto saxophone)
Clarence Shaw (trumpet)
Bill Triglia (piano)
Danny Richmond (drums)
Frankie Dunlop (percussion)
Ysabel Morel (castinets)
Lonnie Elder (vocals)
Features:
• Hybrid Stereo SACD from ORG
• Newly remastered by Bernie Grundman
• Compitable with all SACD and CD players
• Also available on Numbered 180g 45rpm 2LP
Charles Mingus Tijuana Moods Track Listing:
1. Dizzy Moods
2. Ysabel's Table Dance
3. Tijuana Gift Shop
4. Los Mariachis (The Street Musicians)
5. Flamingo
1. Dizzy Moods
2. Ysabel's Table Dance
3. Tijuana Gift Shop
4. Los Mariachis (The Street Musicians)
5. Flamingo
Customers Also Bought