Counting Crows - August and Everything After (Hybrid SACD) 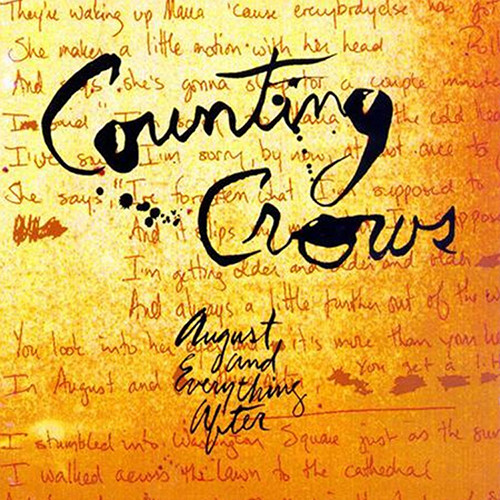 Counting Crows - August and Everything After (Hybrid SACD)

1993 Debut Album Released for the First Time on Hybrid SACD!

By the time the Counting Crows signed to Geffen in 1993, they had already built up a significant fanbase which payed large dividends upon the release of their debut album August And Everything After later that same year. Produced by the-one-and-only T-Bone Burnett, the album climbed all the way to #4 on the Billboard 200 charts thanks to the trio of hit singles "Mr. Jones," "Rain King" and "Round Here," selling over seven million copies in the U.S. alone in the process.

Rated #67 of the '100 Best Albums of the Nineties' by Rolling Stone: "An artfully crafted, intimate song cycle, August and Everything After seemed to explode on impact. Vividly produced by T Bone Burnett, its post-punk bleakness married to old-school rock influences, August became that rare album over which both alterna-kids and classic rockers could bond."

"We were fortunate that this was recorded to analog in an age that had many digital recordings," says Acoustic Sounds founder and CEO Chad Kassem who describes August and Everything After as "one of the better albums in the entire '90s," with a timeless vibe and classic pop sound. Although recorded to audio tape, the album was originally mastered for CD and featured a longer playing time than a standard LP.

Thus Analogue Productions has reissued August and Everything After as a double LP set and Hybrid SACD to maximize the dynamic range of this recording. This is the first time that the 'Crows multi-platinum smash has been released on SACD. Mastered by Ryan Smith at Sterling Sound.

Counting Crows August And Everything After Track Listing: