Ry Cooder - A Meeting by the River (Hybrid SACD) 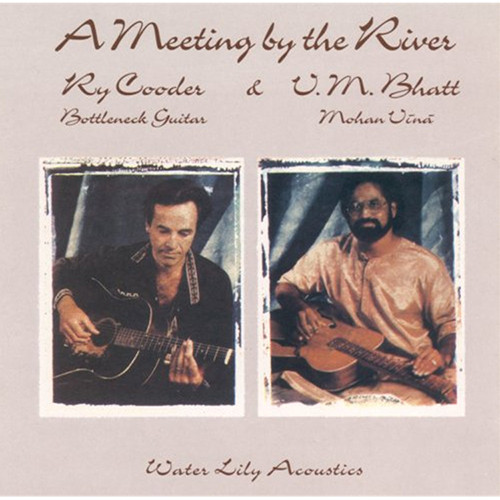 Ry Cooder - A Meeting by the River (Hybrid SACD)

Mastered by Steve Hoffman and Kevin Grey.  10/10 - Sound and Music! This is a must own recording!  American composer, musicologist and guitar legend Ry Cooder teams with North Indian musician Vishwa Mohan Bhatt to create an exquisite musical realm, with both musicians playing exceptional slide guitar. Their collaboration evokes musical elements from many cultures and styles. Percussion by Sukhvindar Singh on tabla and Cooder's 14-year-old son Joachim on dumbek. Grammy Award winner!

"…This record is a must-have for fans of Ry Cooder's explorations into global sounds. The playing is out of this world, and, on these cuts, it has less of a world music feel, and is almost bluesy at times. With the original sessions captured at 15 i.p.s. on all custom deParavicini gear, this is the ultimate stereo test record. The sound is as real, open and airy as it gets; not one more molecule of tone could possibly be put onto these black discs!" – Jeff Dorgay, Tone Audio, No. 15, 2008

"…Astonishingly, the four conversational yet adventurous tracks captured on A Meeting by the River were unrehearsed jams between the two masters, who had met only minutes before the session. The lesson is that Cooder and Bhatt not only knew how to play, but how to listen." – Daniel Durchholz, Stereophile, February 2007

Ry Cooder & V.M Bhatt A Meeting Down By the River Track Listing