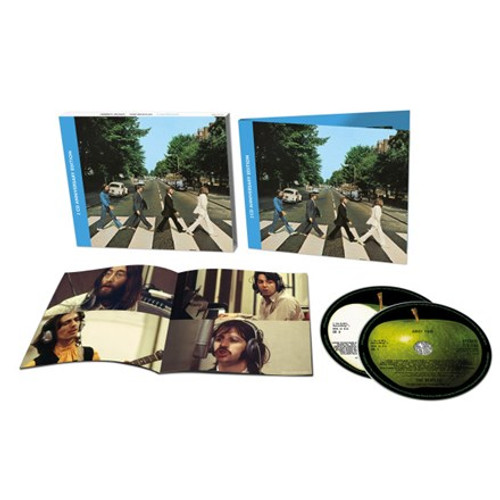 Be alerted when The Beatles - Abbey Road: Anniversary Edition (2CD) * * * is back in stock

Time to stroll across Abbey Road like never before. Fifty years ago, the world's most famous band stepped out from London's EMI Recording Studios to stride, single-file, across the black and white stripes of Abbey Road's nearby zebra crossing. With photographer Iain Macmillan balanced on a stepladder and one policeman stopping the street's light traffic, The Beatles crossed back and forth three times, led by John Lennon, followed by Ringo Starr, Paul McCartney, and George Harrison. Just six photos were taken, with the fifth selected as the cover shot for The Beatles' penultimate studio album, Abbey Road, named after the tree-lined street in which the studios are located.

The Beatles celebrate Abbey Road's anniversary with a suite of beautifully presented packages, extending to this deluxe 2CD set featuring the album's 17 tracks newly mixed by producer Giles Martin and mix engineer Sam Okell in stereo plus versions taken from the session takes and demo recordings sequenced to match the album's running order. A 40-page booklet abridged from the Super Deluxe version's book is also included. To create Abbey Road's new mixes, Martin and Okell worked with an expert team of engineers and audio restoration specialists at Abbey Road Studios. All the new Abbey Road releases feature the new stereo album mix, sourced directly from the original eight-track session tapes. To produce the mix, Giles was guided by the album's original stereo mix supervised by his father, George Martin. "The magic comes from the hands playing the instruments, the blend of The Beatles' voices, the beauty of the arrangements," Giles explains. "Our quest is simply to ensure everything sounds as fresh and hits you as hard as it would have on the day it was recorded."

Released September 26, 1969, Abbey Road was not The Beatles' final album, as Let It Be followed in 1970, but it was the last one John, Paul, George, and Ringo recorded together as a band. Abbey Road was another blockbuster release for The Beatles, holding the No. 1 spot on the U.K. albums chart for a total of 17 weeks and topping Billboard's U.S. albums chart for 11 weeks. For their work on Abbey Road, Geoff Emerick and Phil McDonald won the year's Grammy Award for Best Engineered Recording, Non-Classical. In 1995, Abbey Road was inducted into the Recording Academy's Grammy Hall of Fame, recognizing "recordings of lasting qualitative or historical significance." The Beatles' best-selling studio album, Abbey Road's universal popularity and influence have continued to grow since its debut.