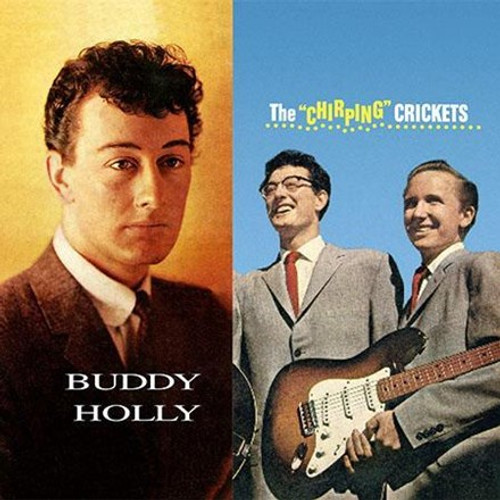 Two Buddy Holly and the Crickets Albums on One Hybrid Mono SACD, Both Remastered from the Original Analog Master Tapes by Kevin Gray at Cohearent Audio

Buddy Holly was without a doubt one of the greatest, most inventive artists in the first wave of rock & roll and his profound influence on popular music is staggering. It all started with his group The Crickets, comprised of a 21-year-old Holly on lead vocals/lead guitar, Niki Sullivan on rhythm guitar, Joe Mauldin on bass and Jerry Allison on drums. And now, you can hear it all like never before, in original mono, on this two-for-one SACD from Analogue Productions.

Originally issued on Brunswick Records in 1957, their cornerstone debut, The "Chirping" Crickets, was the group's lone release during Holly's far too short lifetime, but it left a major mark with No. 1 single "That'll Be the Day" as well as Top Ten hit "Oh, Boy!" and further Crickets classics like "Not Fade Away," "Maybe Baby" and "I'm Looking for Someone to Love." Melding country, rockabilly and R&B into what we now call rock & roll, The "Chirping" Crickets stands tall alongside landmark debuts like Elvis Presley and Meet the Beatles for its visionary songs and musical impact.

Three months after the release of The Chirping Crickets came Buddy Holly's self-titled 1958 classic, the last album issued prior to the Iowa plane crash that struck him down at only age 22. The album Buddy Holly features the Top Ten signature smash "Peggy Sue" plus several songs that have gone on to become standards including "I'm Gonna Love You Too," "Listen To Me," "Everyday," "Words of Love," and "Rave On."