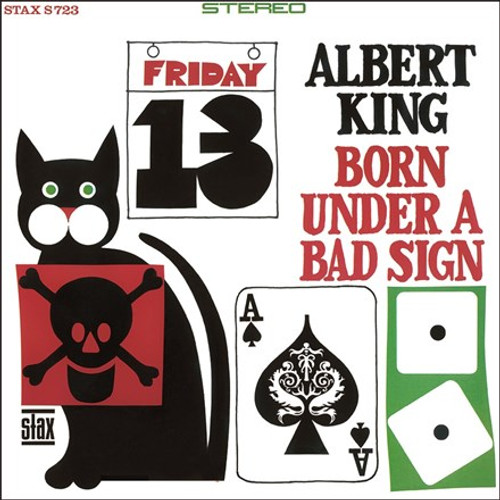 Along with B.B. and Freddie, Albert King will forever be hailed as one of the original "Three Kings of the Blues Guitar." Cutting a dynamic 6' 4" figure on stage while playing his 1958 Gibson Flying V upside down to accommodate his left-handedness, Albert earned the nickname "The Velvet Bulldozer" due to his forceful yet subtle style. An enormous influence on the British blues scene, Eric Clapton was perhaps King's most vocal fan, crediting Cream classics like "Strange Brew" as direct extensions of King's playing. Other axemen falling under his sway were Jimi Hendrix, Jimmy Page, Mick Taylor, Joe Walsh, Robbie Robertson and Stevie Ray Vaughan. By the late-60s, King was headlining rock shows around the country and turning on generations of American fans to the electric blues.

To record Born Under a Bad Sign, King walked "Lucy," his well-worn Flying V, down Memphis' McLemore Avenue and straight into Stax Studios. Once inside, he enlisted the aid of Booker T. and the MGs as well as the Memphis Horns. Talk about a backing band! The combination proved absolutely explosive as the MGs solid groove allowed King to lay down stinging solos with abandon. Though rightly hailed for his guitar prowess, King was also an incredibly soulful singer as he definitively demonstrates throughout the album. Often, he used his guitar as an extension of his voice, answering a vocal line with an equally descriptive lick. Just listen to the back-and-forth of "Laundromat Blues" for a prime example. The album's title track, which became King's signature song, also features fiery vocal and guitar interplay. For the "velvet" side of the bulldozer, try King's tender treatment of the Tin Pan Alley chestnut, "The Very Thought of You."

Upon its release in 1967, Born Under a Bad Sign was hailed as an instant classic. It has since been recognized as one of the all-time great blues albums, with a Grammy Hall of Fame Award, placement in Rolling Stone's "500 Greatest Albums of All Time" and induction into the Blues Foundation Hall of Fame's "Classics of Blues Recordings" among its many accolades. No thorough blues or rock collection is complete without it! This Speakers Corner 180g vinyl reissue was remastered using pure analogue components only, from the master tapes through to the cutting head.