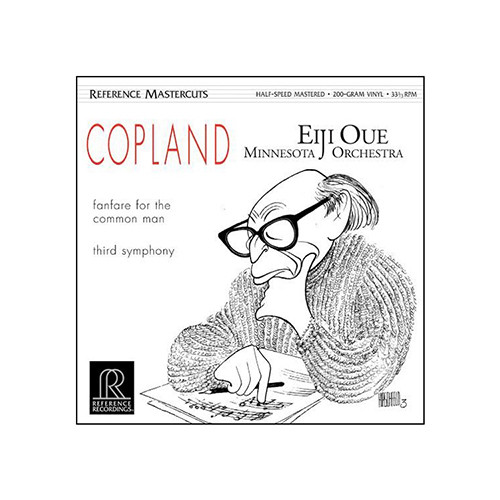 Reference Mastercut Series Recording from "Prof." Keith Johnson!
Half-Speed Mastered by Paul Stubblebine!
Originally released on compact disc to celebrate the 100th Anniversary of the birth of America's favorite composer, now on LP for the first time! The Minnesota Orchestra and conductor Eiji Oue display a real affinity for these Aaron Copland masterpieces: Fanfare for the Common Man and the magnificent Third Symphony, recorded by Grammy-winning engineer "Prof." Keith Johnson.
One of Reference Recordings' most beloved and best reviewed releases, this Reference Mastercuts 33 1/3 rpm 200 gram vinyl offering was half-speed mastered by Paul Stubblebine, pressed by Quality Record Pressings and comes housed in a deluxe gatefold jacket.
“...There has never been a stereo recording of Copland's Third that approaches the concert-hall experience. Until now. This recording clearly has great value as a musical experience, but it also sets a new standard as a sonic showcase for a nearly impossible-to-record work.” - Arthur B. Lintgen, The Absolute Sound
“A compelling performance of the Third Symphony. I think this is among the best recordings since Bernstein - and the sound is spectacular.” - Peter Dickinson, Gramophone
Musicians:
Aaron Copland (composer)
Eiji Oue (conductor)
Minnesota Orchestra
Features:
• Reference Mastercuts
• 33 1/3 rpm 200g vinyl
• Half-speed mastered by Paul Stubblebine
• Quality Record Pressings
• Deluxe gatefold jacket
Reference Recordings LPs: The Reference Mastercuts Series
Assembling the Team
Disc mastering is done at half-speed (see note further in this press release) to insure maximum accuracy. The lathe system has custom electronics by Nelson Pass. The simple signal path contains no compression, equalization or unnecessary circuitry. RR Chief Engineer and Technical Director, “Prof.” Keith Johnson consulted on the design of the system and helped with the rebuilding of the lathe and electronics, which is owned and operated by long-time mastering expert Paul Stubblebine. “Prof.” Johnson has pronounced it equal to the challenge of our master tapes!
Once we achieved successful results in disc mastering, we faced the difficult task of choosing the best plating and pressing facility to manufacture our discs. Fortunately, the new Quality Record Pressings plant in Salina, Kansas was coming on line, and we feel that waiting for this plant to open was well worth it. Chad Kassem assembled a crack team of experts to design and run his new plant, employing many unique techniques and features that clearly set QRP apart from all other pressing plants. We believe the 200-gram deluxe vinyl pressings from QRP are truly exceptional.
Multiple Configurations for New Reference Mastercuts
Depending on program lengths, some new releases will be cut at 45 rpm, some at 33-1/3 rpm. Some will be single discs, some double. All will feature deluxe gate-fold jackets crafted by Stoughton Printing An unusual feature of new RR masterings is what we call the "FDS finish”: the end of each side will have a 30-second band of silent grooves before the “pull-away.” No one today uses a record changer, and the silent grooves allow time to lift the arm before the always-somewhat-noisy tie-off. (Some 1950s vintage Capitol Full Dimensional Sound pressings sported this feature.) RR founder, J. Tamblyn (Tam) Henderson deserves special recognition for identifying the value of this unique production feature and reintroducing it with the new Mastercuts.
Half-Speed Mastering involves a capturing process in which the original recording master is played back at exactly half of the recorded speed. A sequenced cutting lathe is then timed at exactly half of the playback speed. This process allows twice as much time to carve a groove that accurately represents the sound on the master tape. Half-speed mastering allows for cleaner reproduction and also permits extended high frequency response, extending into the ultrasonic region.
Copland - Third Symphony - Fanfare for the Common Man - Eiji Oue - Minnesota Orchestra Track Listing:
1. Fanfare for the Common Man
2. Third Symphony - Molto Moderato
3. Third Symphony - Allegro Molto
4. Third Symphony - Andantino Quasi Allegretto
5. Third Symphony - Molto Deliberato
1. Fanfare for the Common Man
2. Third Symphony - Molto Moderato
3. Third Symphony - Allegro Molto
4. Third Symphony - Andantino Quasi Allegretto
5. Third Symphony - Molto Deliberato