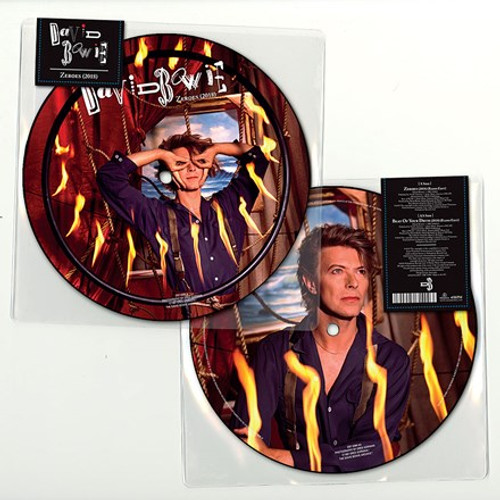 September 2018 sees the release of the newest limited David Bowie 7" picture disc, a double A-side of the radio edits of the 2018 versions of "Zeroes" and "Beat Of Your Drum." Both tracks are from Never Let Me Down (2018), a new version of the 1987 album featured in the new box set Loving The Alien (1983-1988). Never Let Me Down (2018), is a new production of Bowie's final ‘solo' album of the ‘80s. Producer Mario McNulty worked on the tracks at Electric Lady Studios in New York with longtime Bowie musicians Sterling Campbell (Black Tie White Noise, Outside, Hours, Heathen, Reality and The Next Day) on drums, Reeves Gabrels (Tin Machine, Black Tie White Noise, Outside, Earthling and Hours) and David Torn (Heathen, Reality and The Next Day) on guitars and Tim Lefebvre (Blackstar) on bass.

"Zeroes," the lyrics of which reference Prince's "Little Red Corvette" was Bowie's salute to the ‘60s. He described it as "The ultimate happy-go-lucky rock tune, based in the nonsensical period of psychedelia." McNulty commented, "Stripping this song down to its core revealed a track that could have been right at home on Hunky Dory, I kept Peter Frampton's sitar (which was originally owned by Jimi Hendrix) as it still fits against the new guitars from Reeves Gabrels." Of "Beat Of Your Drum," he adds, "David Torn's ambient guitars start the song that now lead into a much darker world than its shiny predecessor. David sang all the backing vocals on this which I have kept." The images on both sides of the picture disc are by Greg Gorman and are outtakes from the Never Let Me Down album photo session.