Price Now $54.99
Was
Was
Save $0.00 (0%)
This product is not eligible for further discounts.
Questions and Answers
Availability: In Stock
This item is in stock and ready to ship. Depending on the time of day when you place your order, it will ship same day or next business day. 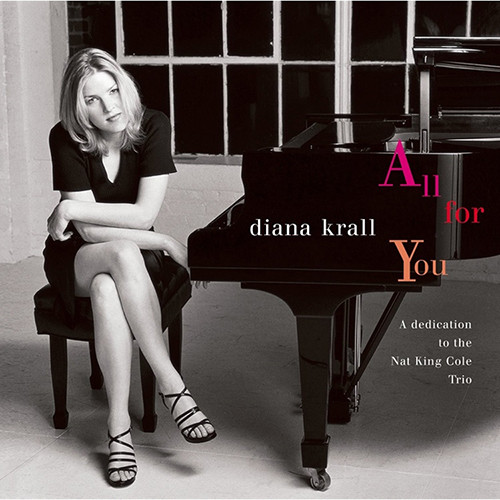 Be alerted when Diana Krall - All For You: A Dedication To The Nat King Cole Trio (180g 45rpm 2LP) is back in stock

Diana Krall All For You: A Dedication To The Nat King Cole Trio on Numbered 180g 45RPM 2LP from ORG

Mastered by Bernie Grundman from the Original Analog Master Tapes

On this salute to pianist/vocalist extraordinaire Nat King Cole, Diana Krall has a lot to live up to, presenting a group of compositions that are ingrained in the public's memory as part of a lasting legacy of both jazz and pop music. It's to her credit that she went about this intimidating task with a resourcefulness and quiet grace that makes All For You an exceptional tribute.
A majority of All For You features Krall in an appropriately unadorned trio setting wonderfully capturing the essence of the Cole trio's arrangements. Krall swings hard with guitarist Russell Malone and bassist Paul Keller on "I'm An Errand Girl For Rhythm" and "Hit That Jive Jack," often employing Cole trio devices such as repeated unison figures and on-top-of-the-beat eighth notes on bass.
Diana Krall's own sultry, understated singing and crisp, straightforward piano is distinctive enough to cast a fine new light on these classic songs while still paying her deepest respects to the iconic Nat King Cole Trio.
"...if you’re going to own but one Krall album, this is the one to own!" - Michael Fremer, www.musicangle.com
Musicians:
Diana Krall (lead vocal, piano)
Russell Malone (guitar)
Paul Keller (bass)
Benny Green (piano)
Steve Kroon (percussion)
Features:
• 180g 45rpm 2LP-set from ORG
• Mastered by Bernie Grundman from the original analog master tapes
• Pressed at RTI
• Numbered deluxe laminated double gatefold jackets
1. I'm An Errand Girl For Rhythm
2. Gee Baby, Ain't I Good To You
3. You Call It Madness
4. Frim Fram Sauce
5. Boulevard Of Broken Dreams
6. Baby Baby All The Time
7. Hit That Jive Jack
8. You're Looking At Me
9. I'm Thru With Love
10. Deed I Do
11. A Blossom Fell
12. If I Had You
Related Videos
How We Pack Your Records At Music Direct
Customers Also Bought