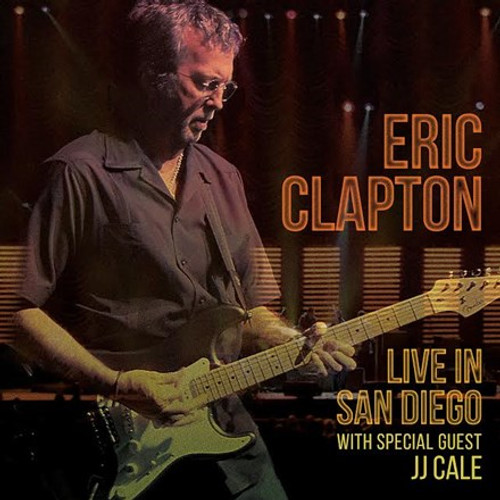 Be alerted when Eric Clapton - Live In San Diego W/ Special Guest J.J. Cale (Vinyl 3LP) is back in stock

Eric Clapton presents Live In San Diego With Special Guest JJ Cale, a 3LP-set recorded at a March 15, 2007 performance at the iPayOne Center in San Diego, CA. This concert was part of a world tour that was much loved by Clapton fans and featured a stellar band that included guitarists Derek Trucks and Doyle Bramhall II. The two-hour San Diego concert was a highlight of the tour as it featured the late great JJ Cale as a special guest on five tracks (including "After Midnight" and "Cocaine"), as well as Robert Cray on the final song of the record, "Crossroads."

After successfully covering several JJ Cale songs over his career, Clapton finally collaborated with Cale in 2006 on the original album Road to Escondido. At the time, Clapton said "This is the realization of what may have been my last ambition, to work with the man whose music has inspired me for as long as I can remember."  So it is fitting that one year later, Cale joined Clapton on stage for this special concert where they performed five songs together - underlining the mutual respect the two musicians had for each other.

Produced and mixed by Simon Climie with additional engineering by Alan Douglas, the concert features a superb set list from across Clapton's unparalleled career. Notably, it includes songs from the music legend's classic Derek and the Dominos album Layla and Other Assorted Love Songs, with Derek Trucks playing many of Duane Allman's original guitar parts.