Price Now $99.00
Was
Was
Save $0.00 (0%)
Questions and Answers
Availability: In Stock
This item is in stock and ready to ship. Depending on the time of day when you place your order, it will ship same day or next business day. 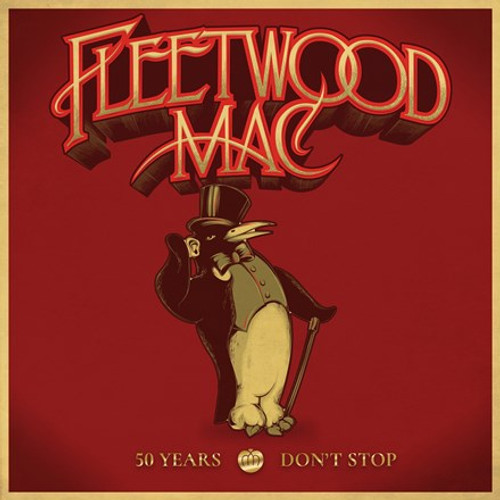 Be alerted when Fleetwood Mac - 50 Years: Don't Stop (Vinyl 5LP Box Set) is back in stock

Fleetwood Mac celebrates a half century of music with the new 50-song collection, 50 Years: Don't Stop, the first to explore the group's entire career, from its early days playing the blues, to its global success as one of the most-enduring and best-selling bands in rock history. The new compilation touches on every era in the band's rich history and offers a deep dive into Fleetwood Mac's expansive catalog by bringing together essential tracks released between 1968 and 2013. It also highlights the talented musicians who have recorded under the Fleetwood Mac banner over the years, including Peter Green, Mick Fleetwood, Jeremey Spencer, John McVie, Danny Kirwan, Christine McVie, Bob Welch, Bob Weston, Lindsey Buckingham, Stevie Nicks, Billy Burnette, Rick Vito, Dave Mason, and Bekka Bramlett. The collection is rounded out by rare photos along with new liner notes by veteran music writer David Wild.

The first third revisits Fleetwood Mac's early years as a blues-rock combo, a six-year period that began in 1968 with the band's self-titled debut and ended in 1974 with its ninth studio album, Heroes Are Hard To Find. Many of the songs featured here were Top 10 hits in the U.K., including "Man Of The World," "Oh Well - Pt. 1," "The Green Manalishi (With The Two Prong Crown)," and the No. 1, "Albatross."

The second third focuses on the band's most commercially successful period with music from a trio of multi-platinum releases - Fleetwood Mac (1975), Rumours (1977), and Tusk (1979) - plus the acclaimed concert album Live (1980). Together they've sold millions of copies worldwide, with Rumours alone selling more than 40 million copies. Several of the band's most beloved tracks come from these records including "Rhiannon," "Say You Love Me," "Go Your Own Way," "Don't Stop," "You Make Loving Fun," and the #1 single "Dreams."