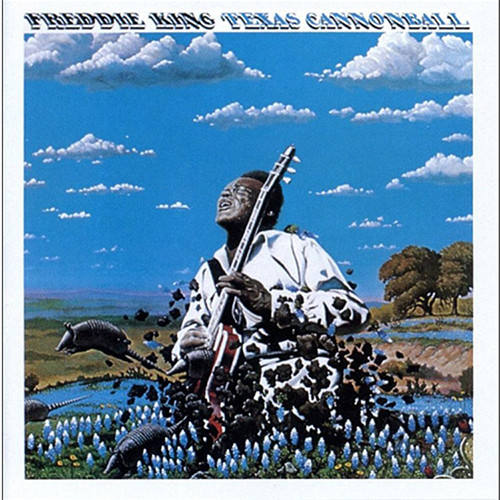 200g LP is Dead-Quiet With Tremendous Presence and Lively Dynamics

Getting Ready... and Woman Across the River Also Available on 200g LP

Nicknamed "The Texas Cannonball," Freddie King was an influential blues guitarist and singer, often mentioned as one of 'the Three Kings' of the electric blues guitar alongside Albert King and B.B. King. He based his guitar style on Texas and Chicago influences and was one of the first bluesmen to have a multiracial backing band onstage with him at live performances.

King had a 20-year recording career, establishing himself as a premier blues guitarist with his early-1960s hits for Federal Records. He inspired American musicians from Stevie Ray Vaughan and Jimmie Vaughan, to Bill Freeman and Rehab's Denny Campbell, and such mid-1960s U.K. blues revivalists as Eric Clapton, Peter Green and Chicken Shack. King died from heart failure on December 28, 1976 at the age of 42.

On this 1972 platter, King contributes originals as well as covers of classics by Howlin' Wolf, Bill Withers, Elmore James, and more. And he's backed by a great cast: Leon Russell, Donald "Duck" Dunn, Al Jackson, and Chuck Blackwell among them. You can't go wrong.

Of course, as much as the music, the reason to acquire this 200g pressing relates to the vibrant sound. Among the first titles to be pressed at Quality Record Pressings, Getting Ready is dead-quiet and yields tremendous grooves and spaciousness, allowing King's guitar to take on a life of its own. Be certain to get the other two King titles by Quality Record Pressings and look forward to more releases from this exciting new audiophile record facility!