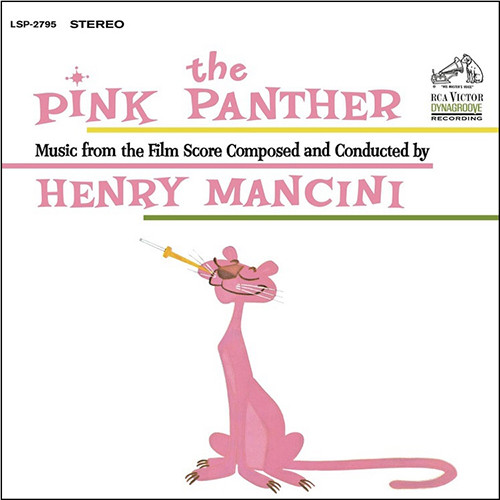 Customers Also Viewed
Description
Henry Mancini The Pink Panther on Limited Edition 200g 45RPM 2LP
Now on 200g 45rpm 2LP!
Mastered from the Analog Tapes by Ryan Smith at Sterling Sound  / Pressed at Quality Record Pressings
Just in time for it's 50th anniversary, Analogue Productions is offering up a new 200g 45rpm 2LP pressing of the quintessential American soundtrack composer Henry Mancini's unforgettable film score for the iconic 1963 crime caper comedy The Pink Panther, starring Peter Sellers and directed by Blake Edwards.
Mancini's indelible "Pink Panther Theme," is, in the current digital era, the #1 most-streamed song in the entire Sony Music catalog. The original Pink Panther soundtrack album, which took home three Grammy Awards in 1964, was given a well deserved Grammy Hall of Fame Award in 2001.
Henry Mancini composed music that's woven into the fabric of American pop culture: "The Pink Panther Theme," the "Peter Gunn" bass line, "Moon River" (from Breakfast at Tiffany's), "Days of Wine and Roses" and more. Mancini holds the record for most Grammy nominations (72), out of which he won 20.  In addition to his four Academy Awards, he won a Golden Globe, secured two Emmy nominations and was honored in 2004 with a United States Commemorative Postal Stamp.
Features:
• 200g 45rpm 2LP-set from Analogue Productions
• Mastered from the analog tapes by Ryan Smith at Sterling Sound
• Pressed at Quality Record Pressings
• Also available on Hybrid Stereo SACD
1. The Pink Panther Theme
2. It Had Better Be Tonight (Instrumental)
3. Royal Blue
4. Champagne and Quail
5. The Village Inn
6. The Tiber Twist
7. It Had Better Be Tonight (Vocal)
8. Cortina
9. The Lonely Princess
10. Something For Sellers
11. Piano and Strings
12. Shades of Sennett