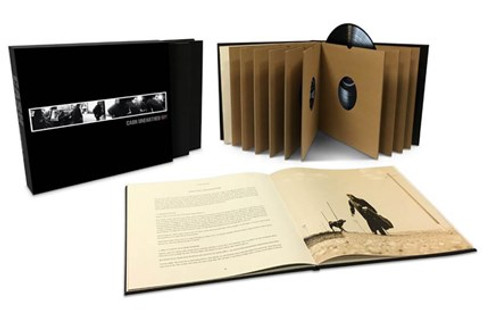 To celebrate the Man in Black's enduring and influential legacy, American Recordings and UMe have reconfigured this monolithic collection for its first-ever vinyl release, spreading Unearthed's 79 songs over 9 high-quality 180g LPs while expanding the original box's distinctive packaging for the long-playing format. The Unearthed vinyl box features a pair of cloth-bound books housed in an LP-sized black cloth slipcase. One book holds the 9 LPs, while the other is a gorgeous 60-page coffee table book that incorporates Sylvie Simmons' extensive liner notes, drawn from five days of interviews at Cash's home in TN, as well as Cash and Rubin's comments on every song on the set, plus a copious selection of photographs from the recording sessions, including some of the last photos ever taken of Cash.

Unearthed was originally released as a CD box set by producer Rick Rubin's American Recordings in November 2003, two months after the country superstar's passing. An expansive box set of material, most of it previously unreleased, recorded during the artist's graceful twilight years. The set was originally planned to celebrate Cash and Rubin's decade of recording together, and the final mixes had been sent to Cash, but he passed away before receiving them. The recordings, which run the stylistic gamut from stark balladry to punchy rockabilly to heartfelt gospel to classic covers, offer a stunning encapsulation of Cash's wide-ranging musical vision, and provide a fitting epitaph for his iconic career.

Unearthed was acclaimed as an instant classic. Rolling Stone named it as one of the "100 Best Albums of the 2000s" and declared the set "a slice of American culture as monumental, and as enduring, as Mt. Rushmore."