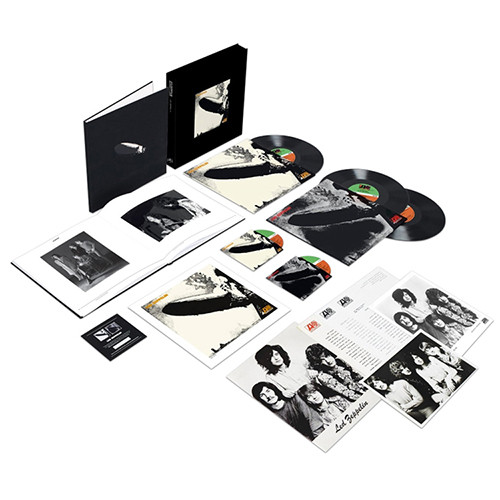 Remastered from the Original Master Tapes by Jimmy Page and Pressed at Pallas: These LPs Sound Better Than Any Prior Zeppelin I Pressing, Companion Audio Documents October 1969 Concert

This is the ultimate Led Zeppelin I package and how this masterpiece record should be experienced. What all deluxe reissues should aspire to be, this Super Deluxe Edition box set of Led Zeppelin I contains both the 180g LP and CD of the remastered album, the previously unreleased companion audio on 180g 2LP and CD, a hardbound album-sized 72-page book with rare and previously unseen photos and memorabilia, a high-quality print of the original album cover, a replica of the band's original Atlantic press kit, and a high-def audio download card of the musical content at 24-bit/96k (live tracks are at 24-bit/48kHz).

Painstakingly remastered from the original master tapes by guitarist Jimmy Page, and pressed at Pallas (Europe's best plant), the 180g LP of Led Zeppelin I sounds utterly amazing. Page spent years on this project with one goal in mind: Making these reissues the end-all-be-all definitive editions of his iconic band's records. He has succeeded, and then some. In addition to the reference-caliber audio, each LP features packaging that fully replicates the look of the first pressing of the original album. You won't believe how these records sound, look, and feel.

The companion audio for Led Zeppelin I: Super Deluxe Edition features a previously unreleased performance recorded on October 10, 1969 at the Olympia Theatre in Paris. The nine-song set features seven tracks from the album, including an epic 15-minute version of "Dazed And Confused," as well as "Heartbreaker" and "Moby Dick," which would debut on Led Zeppelin II later that month.

The Led Zeppelin legend began in January of 1969 with the group's eponymous debut. From the opening salvo of "Good Times Bad Times," on through to "Babe I'm Gonna Leave You," "Communication Breakdown," and "Dazed And Confused," the album introduced the band's unmistakable sound and left an indelible mark on the music landscape. Led Zeppelin I has been certified diamond by the RIAA for sales over 10 million and was inducted into the Grammy® Hall of Fame in 2004.