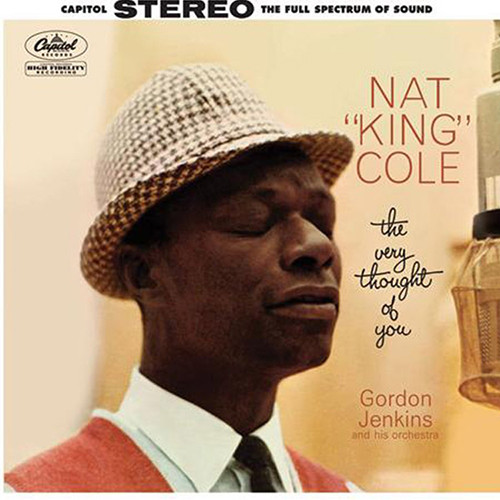 Cole's Just One Of Those Things, Where Did Everyone Go?, A Nat King Cole Story, After Midnight, Love Is the Thing, and St. Louis Blues also Available on 180g 45RPM LP from Analogue Productions

Nat King Cole and arranger Gordon Jenkins followed their hit 1957 album Love Is The Thing by foraging further into romantic and sensual bliss the following year with the 1958 release of The Very Thought Of You. With the spotlight squarely on Cole's unsurpassed voice, as the songs are devoid of pianos or jazz-based instrumentals, this ballad-dominant set thrives on the strength of Jenkins' sweet string work and Cole's emotional, honest deliveries. Everything from the classic title track to the wishful "Making Believe You Are Here" is pure pleasure. If you buy just one Cole record, make this the one. And how.

Never before has this record sounded so sumptuous, with every detail and nuance restored in a manner that places you in the recording studio with Cole. Mastered from the original three-track analog master tapes at Acoustech by Steve Hoffman and Kevin Gray for an unparalleled sonic experience. The combination of music, sound, and emotion is positively scintillating. But that's not all. Analogue Productions went even further to make this an unbelievably definitive reissue.

Also included is a striking six-panel booklet complete with rare photos, a 2,800-word essay by Chris Hall about the album, and a 1,200-word reflection by Michael Fremer about the remastering process. Audiophile delights and vocal albums don't come more definitive than this! Truly no expense was spared in the production or mastering efforts here!

Nat King Cole The Very Thought Of You Track Listing: