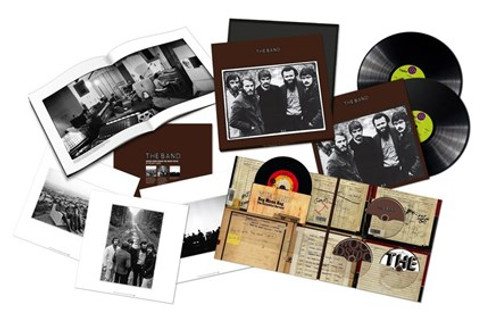 When The Band's seminal eponymous second album was released fifty years ago in September 1969, not much more was known about the reclusive group than when they released their landmark debut, Music From Big Pink, to widespread critical praise and bewilderment, just the year before. The group, made up of four Canadians and one American, was still shrouded in mystery, allowing for listeners and the music press to let their imaginations run wild about who these men were and what this music was that sounded unlike anything else happening at the close of the psychedelic '60s. Dressed like 19th century fire-and-brimstone preachers and singing rustic, sepia-toned songs about America and the deep south, The Band – Garth Hudson (keyboards, piano, horn), Levon Helm (drums, vocals, mandolin), Richard Manuel (keyboards, vocals, drums), Rick Danko (bass, vocals, fiddle) and Robbie Robertson (guitar, piano, vocals) – was an enigma, unlike any group that came before or after. And their self-titled "Brown Album," as it would lovingly be called, cemented their status as one of the most exciting and revolutionary bands in years, on the strength of now-classic songs like "The Night They Drove Old Dixie Down," "Up On Cripple Creek" and "Rag Mama Rag."

The Band's pioneering, self-titled album receives a suite of newly remixed and expanded editions in November 2019 to mark its 50th anniversary including this Super Deluxe 180g vinyl 2LP + 7" + 2CD + Blu-ray box set with a hardbound book featuring the new stereo mix by Bob Clearmountain and all tracks mastered from the original multi-track masters by Bob Ludwig. Chris Bellman cut the vinyl lacquers for the album's new stereo mix at 45 rpm at Bernie Grundman Mastering. All of the configurations were overseen by Robbie Robertson, similar to 2018's acclaimed 50th anniversary Music From Big Pink editions. Clearmountain and Robertson's approach to remixing the beloved album was done with the utmost care and respect for the music and what The Band represents. "The idea was to take you deeper inside the music, but this album is homemade," Robertson says. "You can't touch up a painting. It has nothing to do with what you get when you go into a recording studio." When he expressed his concerns to Clearmountain, the renowned engineer and producer reassured him: "We're just trying to overcome the original technological limitations in order to bring you closer into the room," he explained. "I'm going to do everything in my power not to get in the way of this music at all." The result is a new mix that allows listeners to hear these classic songs in stunning, and often times startling, clarity, packing more of a sonic and emotional punch than ever before.

The box set also includes 13 outtakes, featuring six previously unreleased outtakes and alternate recordings from The Band sessions, as well as The Band's legendary Woodstock performance, which has never been officially released. Exclusively for the box set, Clearmountain has also created a new 5.1 surround mix for the album and bonus tracks, presented on Blu-ray with the new stereo, both in high resolution audio (96kHz/24bit). All the new audio mixes have been mastered by Bob Ludwig at Gateway Mastering. The box set also includes an exclusive reproduction of The Band's 1969 7-inch vinyl single for "Rag Mama Rag" / "The Unfaithful Servant" in their new stereo mixes and a hardbound book with an extensive, illuminating new essay by author and music critic Anthony DeCurtis and classic photos by Elliott Landy which have had an inimitable influence on rock and roll. For the album's new vinyl editions, Chris Bellman cut the vinyl lacquers for the album's new stereo mix at 45 rpm at Bernie Grundman Mastering, expanding the album's vinyl footprint from one LP to two.

Released in 1968, The Band's game-changing debut, Music from Big Pink, seemed to spring from nowhere and everywhere. Drawing from the American roots music panoply of country, blues, R&B, gospel, soul, rockabilly, the honking tenor sax tradition, hymns, funeral dirges, brass band music, folk, and rock 'n' roll, The Band forged a timeless new style that forever changed the course of popular music. Shortly after its release, Danko broke his neck in a serious car crash and was in traction resulting in The Band's inability to tour. This only fueled the mystique as they had yet to play live and had only done a few mysterious interviews. Once Danko was healed, the guys relocated to Los Angeles to record their follow up album. Searching for the same clubhouse vibe they had at Big Pink, they eschewed a traditional studio and moved into a house in the Hollywood Hills that had previously been owned by Sammy Davis Jr. The place had enough bedrooms that the group could reside there with their families and a pool house where they set up the studio. While Capitol Records was dumbfounded the guys didn't want to record in one of their state-of-the-art studios down the street, they ultimately relented and paid for the shipment of their equipment across the country. Recording here was not without its obstacles as getting an upright piano up to the house proved trying and since they were in a residential neighborhood, the pool house needed to be soundproofed from the outside, which was quite a sight.

Following dinner together with their families in the main house, The Band, joined by co-producer John Simon who helped shape their sound, as on their debut, would shuffle off to their makeshift studio to write and record their masterpiece, working through the night and stopping around dawn. Listening to these dusty, rural songs, it's hard to believe they weren't written in the Appalachian Mountains but instead perched up in the hills overlooking Los Angeles' sprawling, smoggy metropolis. It's fitting then that the first song the group recorded for the album was "The Night They Drove Old Dixie Down," a Civil War story that was inspired by a visit Robertson made to Helm's family in Marvell, Arkansas. During one of their talks, Helm's father insisted to Robertson that "The South will rise again!" "I felt that I understood something about Levon from meeting his family," Robertson says. "I wanted to write a song that he could sing better than anyone in the world." The song imbues the people of the South with a forlorn dignity much in contrast to their stereotypical portrayals in popular culture – and Helm's heart-rending vocal tells the song's story with consummate grace.

This was not subject matter that other songwriters were mining from at the time and illustrated how The Band's primary songwriter, Robertson, did not draw inspiration from typical rock sources, instead pulling from history and his love of classic films and screenplays. Indeed, The Band explores America's thorny history through indelible archetypes – "The Night They Drove Old Dixie Down" refers to Union cavalry officer George Stoneman's attack on southwestern Virginia in the last days of the Civil War, "King Harvest (Has Surely Come)" is sung from the perspective of a poverty-stricken farmer who becomes a "union man" to his disappointment, and "Up on Cripple Creek" is about a truck driver's debauched time with a local girl in Lake Charles, Louisiana. "It was a complicated record," Helm wrote in his memoir, This Wheel's On Fire. "We wanted to make one that you didn't really get until the second time you played it."

The Band was released on September 22, 1969 and made an immediate cultural impact. The days of the group being a so-called 'underground' band were over. In short order, the Band appeared on 'The Ed Sullivan Show,' one of only two television appearances the group would ever make, and it had a hit single with "Up on Cripple Creek." In addition, The Band appeared on the cover of Time magazine in January of 1970, the first North American group ever to do so. The Band was instantly hailed by press with The Village Voice's Robert Christgau, calling it an "A-plus record if I've ever rated one" and deeming it "even better" than the Beatles' classic Abbey Road, released the same week. Ralph J. Gleason wrote in his glowing review for Rolling Stone: "It is full of sleepers, diamonds that begin to glow at different times. As with the Beatles and Dylan and the Stones and Crosby-Stills and Nash, the album seems to change shape as you continue to play it. The emphasis shifts from song to song and songs prominent in the early listening will retreat and be replaced in your consciousness by others, only in later hearings to move to the fore again. Little things pop up unexpectedly after numerous listenings and the whole thing serves as a definition of what Gide meant by the necessity of art having density."

Now, listeners can experience that brotherhood once more on The Band (50th Anniversary Edition), in which five visionaries ended up capturing the soul of America with an album that's influence still ripples through current music today five decades later!

LP1
1. Across The Great Divide
2. Rag Mama Rag
3. The Night They Drove Old Dixie Down
4. When You Awake
5. Up On Cripple Creek
6. Whispering Pines