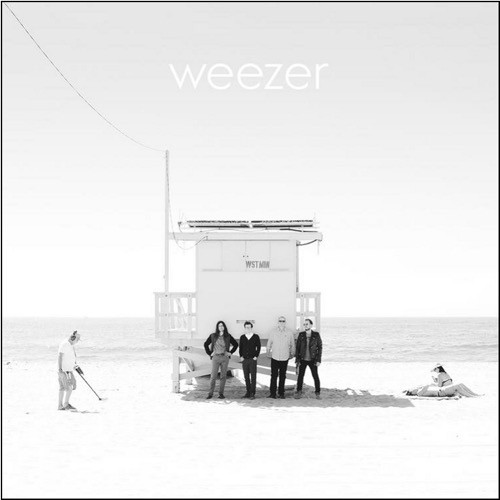 Weezer Weezer (aka The White Album) on LP + Download

The first release from the new Warner Music Group/Crush Music venture will be Weezer's self-titled, tenth studio album (referred to as The White Album), out in April 2016. The release follows-up 2014's Everything Will Be Alright in the End, and marks the band's fourth album named after a color (The Blue Album (1994), The Green Album (2001) and The Red Album (2008)). The first track from the highly anticipated album, "Thank God For Girls" ("insanely catchy new single" - NPR), has charted across multiple genres and is currently sitting in the top 10 at alternative radio.

Rivers Cuomo on the record: "The inspiration behind the songs were my experiences hanging around the Westside of Los Angeles, which has been our home since Weezer began. Hanging out with people in Venice and Santa Monica, the beach, the Hare Krishnas, the Sikh on roller blades with the guitar, girls on Tinder within a 4 mile radius, seeing other bands, the kids from La Sera. I would just tweet out ‘does anybody wanna hang?' and then I'd get together with people who responded and talk about life. I love California. I wanted the album to make you feel like you were there with us SoCal weirdos even if you're in Milwaukee in December.

"Obviously my favorite band has always been the Beach Boys, and what I love about them most are the melodies and the chord progressions. I guess the harmonies too. And the orchestration. Can't forget about the lyrics. So basically everything. I wanted to get that kind of vibe: beautiful tunes and sweet lyrics. I also love the dark side of the beach – Venice after dark, hearing at the Del Monte Speakeasy about how the gangsters used to drag the bodies through the catacombs and leave them under the pier."

Hailing from Los Angeles, CA, Weezer – Cuomo (vocals/guitar), Brian Bell (guitar), Scott Shriner (bass), and Patrick Wilson (drums) – has sold over nine million albums in the U.S. and over 17 million records worldwide. The alt-rock band has proven themselves a force in the industry with a 20-year catalog that features chart-topping hits such as "Buddy Holly," "Say It Ain't So," "Hash Pipe," "Beverly Hills," "Perfect Situation," "Pork and Beans," "El Scorcho," "Island In The Sun," and more.