Equipment Accessories
Price Now $98.00
Was $119.95
Was
Save $21.95 (18%)
This product is not eligible for further discounts.
Questions and Answers
Availability: In Stock
This item is in stock and ready to ship. Depending on the time of day when you place your order, it will ship same day or next business day. 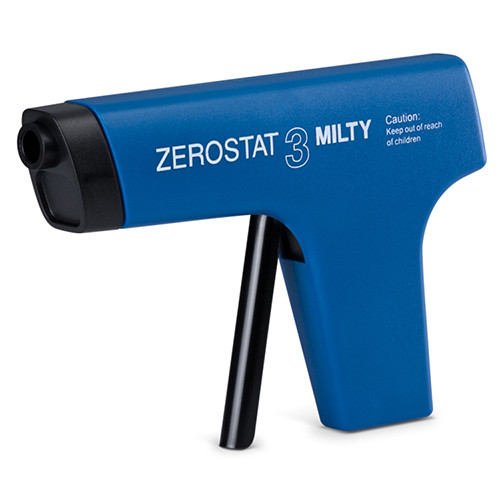 Effectively and quickly remove the static charges on the surface of vinyl records with the Milty Zerostat Anti-Static Gun. An audiophile favorite quipped with two powerful piezoelectric crystals and a patented compression trigger, the lightweight Zerostat instantly eradicates static and the annoying pops and ticks from your LPs. Just point Zerostat two inches away from the surface of your record and squeeze the trigger. Then pull Zerostat away from the record's surface and release the trigger. It's that simple! Zerostat is also perfect for eliminating the static charge that builds up due to the rotation of a record cleaning machine. This is an essential analog accessory and 100% Music Direct Guaranteed.

Zerostat Is Long Lasting and Requires No Batteries or Electricity
Each squeeze of the trigger results in a discharge of 1.5 Coulombs. Users can reasonably expect approximately 10,000 squeeze cycles during the lifetime of Zerostat. Zerostat needs no batteries or electrical supply, nor does it contain any radioactive components. Each Zerostat is shipped with instructions and information about a special 'Test Procedure' to validate that the unit is working properly. Every Zerostat has a 'two cycle' type of operation wherein when the trigger is squeezed, positive ions are generated and when the trigger is relaxed, negative ions flow. This means it is possible to induce a charge on a neutral surface using Zerostat. If the trigger is squeezed and Zerostat is then removed from the surface (and before allowing the trigger to return to its original position), a positive charge will be induced. Similarly, pointing the Zerostat at the surface only for the release of the trigger will induce a negative charge.

Employed in Laboratories and Other Industries
In the laboratory, the Milty Zerostat keeps film, glass, plastic ware, and lenses free of dust and lint. It also prevents charged particles from flying during weighting or transfer of particles. Zerostat also has great applicability for use in photographic darkrooms to remove dust from film and negatives. Scanning electron microscope labs find Zerostat is ideal for eliminating dust from critical samples and other critical surfaces when dust attraction is caused by electrostatic charge.