Equipment Amplification Integrated Amp
Price Now $499.00
Was
Was
Save $0.00 (0%)
Questions and Answers
Availability: In Stock
This item is in stock and ready to ship. Depending on the time of day when you place your order, it will ship same day or next business day. 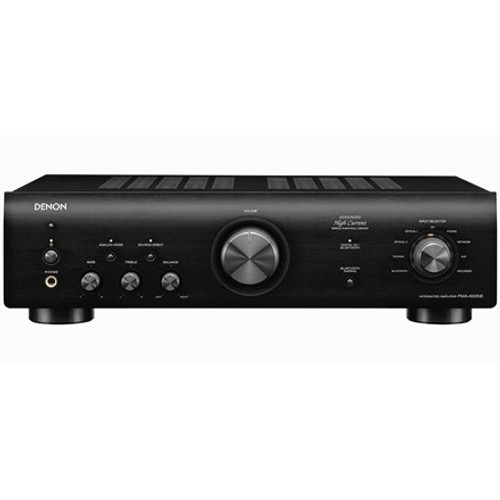 Stellar sonic quality and amazing ease of use are merged in the Denon PMA-600NE Integrated Amplifier, which has built-in Bluetooth, phono preamp, and DAC. That makes it an ideal choice for music enthusiasts who want to build their first two-channel hi-fi system. You can easily connect both analog and digital sources — including your turntable — to the built-in phono pre-amp. This feature-packed amp is your pathway to an entire universe of mesmerizing audio experiences.

Engineered with remarkable Denon amplifier technology, the PMA-600NE Integrated Amplifier delivers 70 watts of power per channel (4 ohms, 1kHz, THD 0.7%). It offers compatibility with a wide range of loudspeaker types and impedances for operational stability. Additionally, you can extend your audio experience with nearly unlimited sources. With the antenna inside the unit, you can pair the PMA-600NE to your smart device or computer via Bluetooth and stream your favorite music wirelessly. Plus, you can connect your TV, media player, computer, or any digital source via the optical and coaxial digital inputs for an exceptional audio performance with the built-in DAC (digital-to-analog converter).

The PMA- 600NE incorporates Advanced High Current (AHC) transistors with two-to-three times the electrical current supply capacity of conventional audio power transistors. The acclaimed Denon AHC single-push-pull circuit allows for a discrete amplifier in the PMA-600NE, producing powerful sound with musical fidelity. Denon's engineers carefully constructed the amplifier circuit within the PMA-600NE to secure a frequency response of up to 100 kHz during applied use. The volume circuit suppresses noise in the amplifier, achieving high sonic resolution. The architecture of the PMA-600NE enables it to handle a wide range of high-resolution audio sources, with tone control and power throughout.

The PMA-600NE features two optical inputs and one coaxial input and supports PCM signals up to 192kHz/24-bit. These digital inputs help to improve sound and visual quality of your TV, Blu-ray, media players, and more. Also, you can use it to input high-resolution sound from an audio source on your computer.

The PMA-600NE's Analog Mode allows it to operate as a purely analog amp — disabling digital inputs, as well as Bluetooth, while you listen to an analog source. You can turn on Analog Mode to close power to the dedicated digital power source and stop operation of the digital input and Bluetooth circuity, thus avoiding any high-frequency influence on the analog section of the PMA-600NE. The result is that you can relax and enjoy your favorite analog sources with uninhibited clarity and detailed reproduction.

The PMA-600NE has a built-in phono preamp (aka equalizer) that supports playing vinyl with a MM cartridge. This phono equalizer has high gain — and unlike the loops in other circuit board patterns, which can cause adverse effects on sound quality — the simple, straightforward design of the PMA-600NE significantly improves sound. Plus, this amp has a headphone jack if you want to get totally lost in the music. The front-panel tone controls for treble and bass allow you to adjust the sound to suit your preferences. A remote control is also included.

The Signal Level Divided Construction (SLDC) chassis developed by Denon is used in the audio circuit to ensure that delicate musical signals are faithfully amplified and transmitted to the loudspeakers. This allows you to consistently enjoy exemplary audio quality, regardless of the source. (With the subwoofer output, you also have the option to easily expand your hi-fi system to enjoy immersive, evenly dispersed bass.)

The PMA-600NE and its internal components are thoughtfully selected, carefully engineered, and definitely built to last. Like all Music Direct products, the Denon PMA-600NE Integrated Amplifier comes with the 100% Music Direct Satisfaction Guarantee.

"[The Denon DCD-600NE CD player and the Denon PMA-600NE integrated amplifier are] the perfect beginner's system you can easily recommend to your best friend for maximum fun, at a tight budget. It sounds good and offers everything you need at this level — and you won't regret anything. Thanks to its built-in DAC, Bluetooth, turntable, and subwoofer connections, it is also perfectly equipped for the future."
—Tom Frantzen, Stereo Magazine

"[Matched with KEF LS50 bookshelf speakers] ... the sound was just so coherent, so huge, but clearly focused.... The sound was spine-tingling.... I am truly excited by [the PMA-600NE].... It's nice to have an integrated amp that has all these great features and sells for [a] very reasonable price."
—Steve Guttenberg, The Audiophiliac (YouTube)

"[The PMA-600NE] is very, very easy to operate, as everything is clearly and cleanly laid out.... So, if you're on a budget, or building a setup for a secondary room in your home — or you're just looking for something that's going to allow you to listen for hours on end without a great deal of fuss — then I think the Denon is worth a look."
—Andrew Robinson, The Recovering Audiophile (YouTube)