Equipment Amplification Power Amp
Price Now $3,299.00
Was
Was
Save $0.00 (0%)
This product is not eligible for further discounts.
Questions and Answers
Availability: In Stock
This item is in stock and ready to ship. Depending on the time of day when you place your order, it will ship same day or next business day. 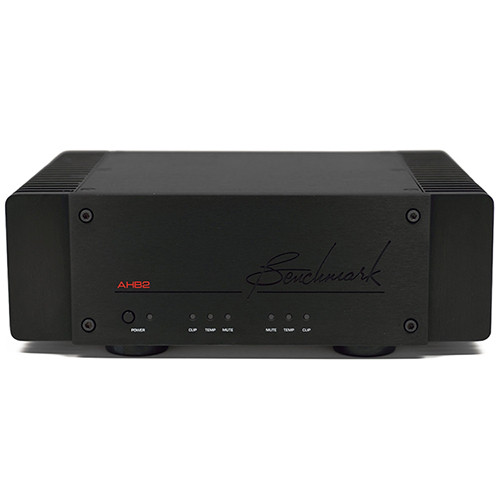 Be alerted when Benchmark - AHB2 Power Amplifier is back in stock

"There's nothing here to inspire cults, 'merely' a precision instrument that performs the precisely defined task of reproducing music and sound essentially to perfection. I can't recall why I didn't purchase the loaner when I reviewed [it], but that has since been rectified: The AHB2 is now my reference amplifier."
– Paul Seydor, The Absolute Sound, 2019 Golden Ear Award

"This is an amplifier with very serious slam, and – even better for those with less sensitive speakers, big rooms or just a hankering for 'just in front of the PA stack' listening levels – it keeps it all together however loud you decide to play things."
– Hi-Fi News, Editor's Choice review

"If ever there were a giant-killer of an amp, this is it."
– SoundStage! Hi-Fi, Recommended Reference Component

"The Benchmark AHB2 embodies everything that a solid-state amp should. It is a technologically advanced and remarkable amplifier that can hang with any amp in its class because it is sonically transparent, images beautifully, and produces authoritative bass. While costing only $2,995, it is hard to imagine asking for much more in a power amplifier."
– Home Theater Review

"As desired in a studio setting, the sonics from the AHB2 are neutral, and in my home setup, there is no observable emphasis in any particular frequency range."
– Rob Johnson, TONEAudio

"I very much enjoyed my time evaluating the Benchmark AHB2 amplifier and can heartily recommend it to those seeking one of the lowest distortion and lowest noise amplifiers on the planet – one that is very musically transparent and easy on the ears to boot."
– Frank Alles, Stereo Times

"The Benchmark brings out nuances of reverb, quick percussive guitar attack with amazing clarity, but no over the top edginess...The -130 dB noise/dynamic range just gets us that much closer to the live music signature that we yearn to hear from our beloved electronics."
– John Gatski, Everything Audio Network

High-Resolution audio is only as good as the weakest link in the playback system. Benchmark's AHB2 power amplifier delivers musical details without introducing the masking effects of amplifier noise and distortion. The dynamic range of the AHB2 is 130 dB, making it 10 to 30 dB quieter than the typical reference-quality power amplifier. You will discover previously overlooked nuances, dynamics, and detail in your favorite recordings and experience the full potential of the latest high-resolution 24-bit PCM and 1-bit DSD audio formats. The AHB2 delivers a noise performance and a frequency response that is well matched to the capabilities of DSD and 24-bit PCM formats. The AHB2 is a the ideal match to the performance limits of high-resolution formats.

The AHB2 has a high damping factor that augments its extended low-end to deliver solid, well-controlled bass. It's a stunning experience to finally hear full bandwidth high-resolution playback. The AHB2 allows you to escape the distortion limitations of classic amplifier topologies and enter the world of high-resolution audio playback.

The AHB2 amplifier is radically different than traditional audio amplifiers. Two new THX-patented feed-forward error-correction technologies eliminate most sources of distortion. An unconventional power supply maintains tight regulation and low ripple while minimizing magnetic fields. A low-gain topology optimizes the gain staging between the D/A converter and the power amplifier while minimizing noise. Sophisticated shielding and star-quad signal distribution provide outstanding immunity to interference. A unique output stage incorporates a hybrid of class-H and class-G tracking power supply rails to improve efficiency. The result is that the cool-running AHB2 has a signal to noise ratio of 130 dB while distortion is at or below the measurement limits of the finest test equipment. The patented THX-AAA Technology (TM) uses feed-forward error correction to reduce distortion to vanishingly low levels while enabling several power-saving techniques.

Class-AB amplifiers generate crossover distortion every time the output stage crosses 0 volts. This crossover distortion can be especially problematic at low playback levels. Class-A output stages eliminate this crossover distortion at the expense of high power consumption, poor damping, and a limited dynamic range. Traditional class-AB designs attempt to control distortion through the use of feedback. Unfortunately, these feedback systems have a limited ability to reduce the abrupt transients caused by output device crossover transitions. In the AHB2, an ultra-clean low-power error-correction amplifier runs in parallel with the main high-power output amplifier. The error amplifier feeds a correction signal forward to sum with the output of the main amplifier. The correction signal is a precise mirror of the errors produced by the main class-AB amplifier. This technique produces a near-perfect cancellation of the errors produced by the main amplifier.

The THX-patented feed-forward error correction used in the AHB2 is so effective that biasing of the class-AB bi-polar output devices can be reduced to unusually low levels. Benchmark has chosen to maintain a small bias current in the output stage, but this bias current is not critical to the distortion performance of the unit. The benefit of low bias current is that very little power is wasted as heat. The feed-forward error correction also allows the use of tracking power supply rails without the usual distortion-performance penalty. These tracking rails significantly improve the overall efficiency of the amplifier while the error correction keeps distortion nearly nonexistent. The AHB2 rivals the efficiency of Class-D amplifiers while exceeding the sonic performance of power-hungry Class-A designs.

The AHB2 has bi-polar class-AB output stage that delivers high output current and low noise. The THX patented feed-forward error correction provides accurate cancellation of zero-crossing errors. Class-AB amplifiers usually generate crossover distortion every time the output stage crosses 0 volts. This crossover distortion can be especially problematic at low playback levels. In contrast, class A output stages eliminate this crossover distortion at the expense of high power consumption, poor damping, and a limited dynamic range. Until now, this has posed a trade off between class-AB and class-A designs, a trade off between efficiency and low crossover distortion. Benchmark has now combined the best characteristics of class-AB and class-A amplification to create an amplifier that outperforms both of these traditional designs. Low-level details and reverb tails are rendered with stunning resolution.

Most high-quality power amplifiers have linear power supplies, large toroidal transformers, and large banks of energy-storage capacitors. These linear supplies are usually unregulated and the capacitors help to remove ripple produced by the audio and by the AC line. In contrast, the AHB2 uses a resonant switching power supply that has a very fast control loop. This control loop responds to audio-frequency load changes and keeps the supply voltage constant without the use of a large bank of capacitors. This active regulation is much more effective than capacitive energy-storage. Maximum power output of the AHB2 does not vary with line voltage or audio loading. The power supply rails maintain a constant voltage during audio peaks.

The power supply in the AHB2 switches at frequencies that are well above audible frequencies. Mechanical hum is eliminated while magnetic field strength is significantly reduced. For a given amount of power, magnetic field strength decreases as switching frequency increases. High-frequency magnetic components are also much smaller than line-frequency magnetic components. The supply is well over 90% efficient, and very little power is lost to heat. The switching power supply used in the AHB2 is a zero-voltage switching, resonant power converter. This means that the power devices in the supply switch near zero voltage and zero current - eliminating the large switching transients produced by conventional switching power supplies. The power supply in the AHB2 is actually much cleaner and quieter than a conventional linear supply.

The power-efficient Benchmark AHB2 Power Amp uses passive heat sinks to maintain cool operation. The AHB2 delivers high power without the need for fans. The unit runs cool, even when playing audio at full output levels. The absence of fan noise is absolutely essential in a high-resolution listening environment.

The low-noise input amplifiers on the AHB2 are equipped with precision balanced inputs. Benchmark considers balanced inputs essential in a true high-resolution system.

The AHB2 is a low-gain design. Maximum output is not reached until the balanced inputs reach +22 dBu. This is a much higher signal level than is used at the input of most power amplifiers. High interface signal levels are required to achieve the best possible system signal to noise ratio (SNR). Most power amplifiers have far too much gain and consequently they suffer from poor noise performance. The AHB2 is 10 dB to 30 dB quieter than some of the very best power amplifiers on the market. A rear-panel gain switch can be used to set the AHB2 at higher gain settings if necessary. The low-gain setting is designed to interface directly with Benchmark DAC2 converters and other professional audio products.