Equipment Amplification Preamp
Price Now $30,000.00
Was
Was
Save $0.00 (0%)
Questions and Answers
Availability: In Stock
This item is in stock and ready to ship. Depending on the time of day when you place your order, it will ship same day or next business day. 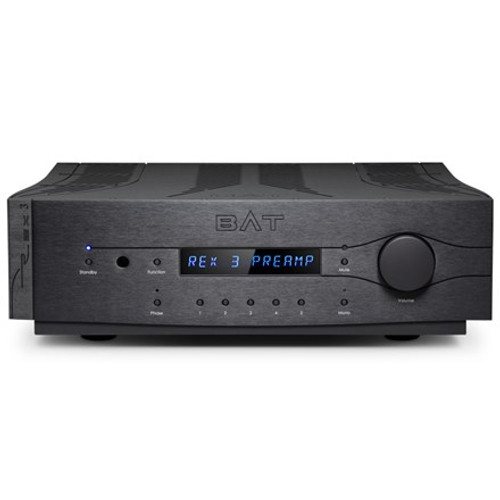 What a Reference-Setting Tube Preamplifier Should Sound Like and Be: Two-Box Balanced Audio Technology REX 3 Loaded with Bespoke Engineering, Plays with Absolute Realism

Devised from the ground up, and the culmination of 25 years of thorough research, trials, and testing, the Balanced Audio Technology REX 3 reimagines what a reference line-stage tube preamplifier should look like, sound like, and feature. Consider, for a moment, the architecture and technology: A total of 18 tubes. Two separate boxes. Balanced topology. A UniStage circuit that transmits the critical signal through just one gain stage – and without global feedback. Second-generation amorphous-core output transformers wound with Cardas Audio's finest OFC wire. A power module incorporating BAT's oil-filled capacitors in a robust SuperPak assembly. Individual dual-mono power supplies for each polarity. An incredible user interface, an abundance of customizable options, and a proprietary electronic shunt volume attenuator. Yes, this two-box unit came not only to play, but rule the playground.

Your ears will decide, but the REX 3 power module may be the finest all-tube power supply to ever grace a preamplifier. In the power module, an enhanced SuperPak assembly (complete with additional oil-filled capacitors) perfectly complements the SuperPak assembly in the control module. The former dramatically enhances the power supply for the 10 tubes within it. The tubes in the power module get additional support in the form of two, large toroidal transformers in true dual-mono configuration. Vacuum-tube rectifiers and user-configurable current sources, as well as vacuum-tube AC shunt regulators, provide final levels of refinement for the massive power supply.

Of course, the extreme performance offered by REX 3 does not end with vacuum-tube rectification, vacuum-tube current sources, or enhanced SuperPak capacitors. In this regard, REX 3 is not just a preamplifier with an external power supply box – a conventional type of partition that suffers from several well-known drawbacks, foremost being the high-impedance nature of the remote power supply. Here, REX 3 is a very different beast altogether. In it, the control box offers the benefit of a low-impedance local power supply while also preserving an upgrade path for owners of the forthcoming BAT single-chassis preamplifier.

Lest we forget, REX 3 uses eight 6H30 SuperTubes in its control module to achieve an extraordinarily high-current, low-impedance drive capability. To put it another way, REX 3 would need 32 6922 tubes to offer the same current delivery as its 6H30 SuperTube-based implementation! REX 3 even incorporates a unique power-supply feature that allows the user to optimize its sound and tailor it to their individual taste and system requirements. (Read more about the options below.)

Of course, BAT created REX 3 to be a breeze to use right out of the box(es). Name your sources at will. For example, choose VKD5 for your CD player input or MOVI for home-theater playback. Fix your volume for the MOVI input to effortlessly control your home-theater system from your pre/pro remote. Select a fixed balance adjustment for the phono input to accommodate an older phono cartridge. Switch phase from your chair to see if a recording was made in reverse polarity. Even if you only use one of REX 3's extensive features, you'll likely find it priceless for making your audio setup ideally tailored to fit your needs.

Most importantly, from start to finish, REX 3 provides beguiling levels of unmitigated transparency, dynamic scale, and textural insight. Music's impact, energy, liveliness, finesse, and beauty are effortlessly conveyed via this eighteen-tube flagship. In every regard, the REX 3 stands as the finest-ever preamplifier from a company whose designs have for decades been renowned for their sublime musicality, power, and grace. 100% Music Direct Satisfaction Guaranteed.

"Balanced Audio Technology has always produced world-class vacuum tube components, but the REX 3 preamp not only eclipses everything they've done in the past, it eclipses most other preamplifiers on the market at any price.... Unlike some line-stages that rely on transformers to provide balanced inputs or outputs, the REX 3 is a fully balanced design from input to output.... Prepare to have your perceptions altered in an incredibly good way."
—TONE Masterpiece Award

"[BAT's] first generation of REX amplifier and preamplifier were head turners to be sure, but this new, two-chassis REX preamplifier eclipses everything they have ever produced. Are you ready for a reboot in what you thought was possible?"
—TONEAudio, Publisher's Choice Award

To celebrate its 25th anniversary, Balanced Audio Technology worked closely with its long-term industry partners to improve upon the stellar performance of the BAT output transformer. In the past decade, switching from coupling capacitors to output transformers made the greatest improvement in the sonic performance of BAT preamplifiers and source components. New, second-generation BAT output transformers feature Cardas Audio's finest OFC wiring. These greatly enhanced transformers debut in the REX 3 preamplifier (as well as the REX 3 DAC). According to BAT co-founder and chief engineer Victor Khomenko, "The new transformers' electrical performance sets a new benchmark in achieving low-restriction signal purity and linearity. This is heard as improvement in openness and transparency. They are the most ideal devices to maintain the benefit of our UniStage (single gain-stage signal amplification) architecture. There is less between the listener and the music." In REX 3, BAT's transformer-coupled output stage continues to prove itself substantially superior to any capacitor solution in maintaining the purity of signal transmission. Electrically, these second-generation custom transformers further improve the preamplifier's ability to drive low-impedance loads. Sonically, they offer greater dynamics, transparency, and top-to-bottom extension while maintaining the organic portrayal of music.

Simplicity of design, especially in the direct signal path, has always been a hallmark of Balanced Audio Technology's purist approach to circuit topology. Some advocates of the pursuit like to talk about a "direct wire with gain" as being the ideal circuit. REX 3 deftly meets this simple design criterion. The signal in REX 3 gets transmitted through only one gain stage, an approach free of the negative artifacts attributable to both extremes of modern preamplifier designs: passive preamplifiers on one end of the spectrum and multistage buffered active circuits on the other. Indeed, the benefit of the UniStage circuit pertains to the fact that it provides the ultimate simplicity of amplifying the incoming signal only once while using no global feedback to double-back on the straight-through integrity of said signal. Imagine telling a joke to your friends and telling them to "pass it on." Pass it on enough times and you won't recognize the joke. Pass the music through too many gain stages, and you'll no longer recognize the genius, beauty, and integrity of your favorite recordings.

Balanced Audio Technology staked its reputation on this principal of circuit design from Day One. In BAT's opinion, balanced topology provides a complete signal representation. Something magical happens when you free yourself from the limitations of the single-ended structure with its half-signal processing. In laymen terms, if a one-handed craftsman can be very good, imagine what he could do with two hands. It is fairly common to associate the advantages of balanced design with improved signal integrity when dealing with long interconnects, for example. However, the true benefits of a balanced approach to circuit design go far beyond signal transmission. They include such fundamental aspects of design as the interaction between the power supply and its associated gain stage. Consider: It has become common wisdom that the power supply should be considered a part of the signal path. However, whereas the sonic contribution of the power supply can be overwhelming in a single-ended design, it is much less of a concern in a balanced circuit. As the circuit becomes more symmetrical, the residual effect of the power supply becomes less intrusive. In effect, the demand on the power supply gets reduced, making it easier to design a balanced circuit that conforms more closely to the engineering ideal.

REX 3 incorporates a unique feature that allows the user to optimize its sound and tailor it to their individual taste and system requirements. The vacuum-tube current sources incorporated in REX 3 are part of the signal gain stage and therefore have a direct effect on the preamplifier's final sound. In its standard configuration, REX 3 uses the Russian 6C19 as current source tubes. The 6C19 is basically a miniature version of the famous 6C33 tube and provides, in BAT's view, the best combination of sonic characteristics and electrical performance. However, the bespoke design of REX 3 allows any customer to use other tube types as current sources. Currently, the user has three choices for vacuum-tube current sources:

Finally, the user also has a switch-selectable choice between either the 6C45 or 6H30 SuperTube as the AC shunt regulator tube used within the REX 3 power module. These options allow listeners to tailor the REX 3 preamplifier's sound to meet their specific preferences (e.g. providing a more romantic sound if desired).

REX 3 employs a proprietary electronic shunt volume attenuator that offers 140 steps of 0.5dB resolution. It uses a Vishay bulk foil resistor, the most precise and low-distortion resistor in the world. Discrete metal film resistors bleed the unused signal to ground. The 140 steps allow for precise, repeatable volume settings that sound continuous to the human ear. With REX 3, you can always get the volume just right!